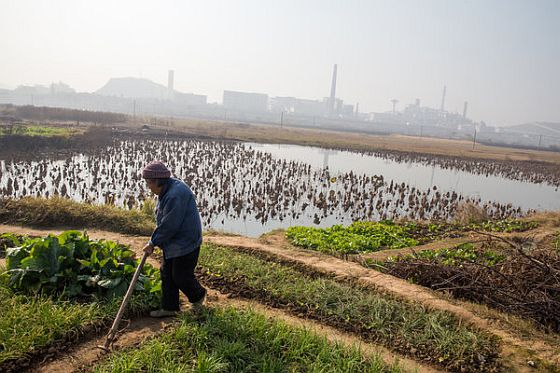 The New York Times reports: The farm-to-table process in China starts in villages like this one in the agricultural heartland. Food from the fields of Ge Songqing and her neighbors ends up in their kitchens or in the local market, and from there goes to other provinces. The foods are Chinese staples: rice, cabbage, carrots, turnips and sweet potatoes.

But the fields are ringed by factories and irrigated with water tainted by industrial waste. Levels of toxic heavy metals in the wastewater here are among the highest in China, and residents fear the soil is similarly contaminated. Though they have no scientific proof, they suspect that a spate of cancer deaths is linked to the pollution, and worry about lead levels in the children’s blood.

“Of course I’m afraid,” said Ms. Ge, in her 60s, pointing to the smokestacks looming over her fields and the stagnant, algae-filled irrigation canals surrounding a home she shares with a granddaughter and her husband, a former soldier. “But we don’t do physical checkups. If we find out we have cancer, it’s only a burden on the children.”

With awareness of China’s severe environmental degradation rising, there has been a surge of anxiety in the last year among ordinary Chinese and some officials over soil pollution in the country’s agricultural centers and the potential effects on the food chain. In recent years, the government has conducted widespread testing of soil across China, but it has not released the results, adding to the fear and making it more difficult for most Chinese to judge what they eat and pinpoint the offending factories.

An alarming glimpse of official findings came on Monday, when a vice minister of land and resources, Wang Shiyuan, said at a news conference in Beijing that eight million acres of China’s farmland, equal to the size of Maryland, had become so polluted that planting crops on it “should not be allowed.”

A signal moment came in May, when officials in Guangdong Province, in the far south, said they had discovered excessive levels of cadmium in 155 batches of rice collected from markets, restaurants and storehouses. Of those, 89 were from Hunan Province, where Ms. Ge farms.

The report set off a nationwide scare. In June, China Daily, an official English-language newspaper, published an editorial saying that “soil contaminated with heavy metals is eroding the foundation of the country’s food safety and becoming a looming public health hazard.”

One-sixth of China’s arable land — nearly 50 million acres — suffers from soil pollution, according to a book published this year by the Ministry of Environmental Protection. The book, “Soil Pollution and Physical Health,” said that more than 13 million tons of crops harvested each year were contaminated with heavy metals, and that 22 million acres of farmland were affected by pesticides.

But the government has refused to divulge details of the pollution, leaving farmers and consumers in the dark about the levels of contaminants in the food chain. The soil survey, completed in 2010, has been locked away as a “state secret.” [Continue reading…]