David Kenner reports: On Dec. 20, 2013, Molhem Barakat took his last picture of the Syrian war. He had been photographing a battle for control of Aleppo’s al-Kindi Hospital when he was killed along with his older brother Mustafa, a fighter in a local rebel brigade.

Barakat’s cameras, apparently provided to him by the news agency Reuters, were photographed covered in blood in the aftermath of the attack. 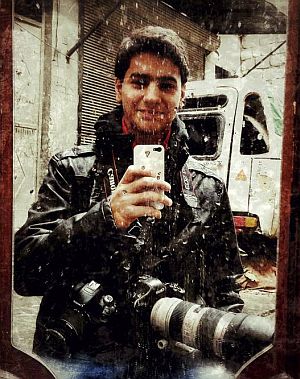 Barakat was just 18 when he died, but his images — transmitted through the Reuters photo service — gave people across the globe a glimpse into his world, and his country’s war. But while his precocious work appeared everywhere from the New York Times to Foreign Policy, his online presence served as a reminder that he was still a teenager. His last tweet brags about unlocking a new level in a computer racing game; his Facebook account is full of smiling selfies.

“I was there the moment he grabbed the first camera — I still remember it. It was a Sony HD Handycam, and he was just so good with it,” said Adnan Haddad, a Syrian activist currently in Gaziantep, Turkey, who first enlisted Barakat to work in the pro-uprising Aleppo Media Center in the winter of 2012. “He’s a big loss. He was a young guy, a smart one, a very fast learner, and losing him like this — for the sake of making a few hundred dollars — is not worth it.”

Barakat took the sort of risks that would horrify most veteran journalists. One video posted on YouTube shows him trying to aid a stricken rebel fighter (he appears 56 seconds in) as other fighters warn of a nearby tank. He ducks behind a piece of debris for cover as the tank fires, and the picture is lost in the reverberations from the explosion.

This, clearly, was no ordinary childhood.

Barakat lived in the heart of the world’s most dangerous conflict, one that has claimed the lives of at least 61 journalists and has resulted in the kidnapping of dozens more. The overwhelming majority of journalists killed have been Syrians like Barakat, the only ones remaining to cover the story after the country became too dangerous for most foreign journalists.

Barakat’s death has raised a furor among war correspondents, who have criticized Reuters for not doing enough to protect the young Syrians whom it relies on for coverage of the war zone. Barakat’s extreme youth was only one aspect of the ethical dilemma: Journalists have raised questions about his lack of protective gear, his political affiliation with a rebel brigade, and whether Reuters violated its own safety guidelines by putting him in harm’s way.

Photographer Stanislav Krupar told journalist Corey Pein, who was one of the first to raise questions about this case, that Barakat was paid as little as $100 for a set of 10 or more photographs. Barakat used this money, according to Haddad, to improve the living conditions of his mother and father, who struggled with poverty even before the uprising and whose financial situation only worsened with the war. [Continue reading…]