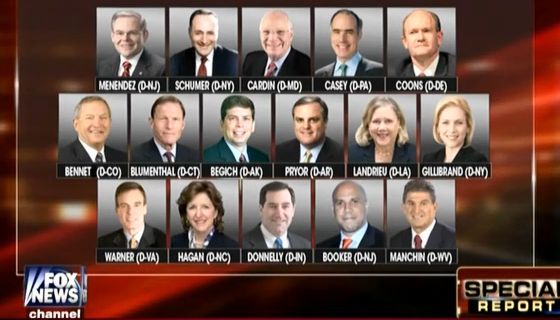 In 2005, AIPAC’s Steven Rosen when prompted by Jeffrey Goldberg to assess the level of the lobby’s influence famously said: “In twenty-four hours, we could have the signatures of seventy senators on this napkin.”

The “Nuclear Weapon Free Iran Act of 2013” sponsored by Democratic Senator Robert Menedez has the support of fifty-nine senators. That’s a dangerously large majority but short of a veto-proof sixty-seven votes and well short of Rosen’s seventy.

Does that mean that AIPAC is refraining from pulling its weight or is it just not as powerful as Rosen declared?

I called my Democratic Senator Kay Hagan, one of the co-sponsors of the bill, to tell her that if she follows through and casts a vote in favor, she won’t have my vote in November. Interestingly, her staffer was at pains to underline the fact that this is still in process and hasn’t gone to a vote. I got a strong sense that Hagan, perhaps like many other senators both Democratic and Republican, would be content demonstrating her loyalty to AIPAC without actually casting a vote.

In the report below, Republican Senator Roy Blunt essentially says that every senator’s hands have been tied by Senate leader Harry Reid and far from striking a defiant tone, Blunt seems content to be rendered powerless.

If the bill got just one more supporter, would Reid bow to pressure and let it go to a vote? And can’t AIPAC with all its influence turn just one more senator in its favor?

I get the sense that for everyone involved — including AIPAC — this is all political theater. They want to act tough, but at the end of the day, they probably don’t want to be held responsible for sabotaging the most significant diplomatic opening in a decade.

National Journal reports: Senate Iran hawks have lots of votes to back their sanctions legislation. What they lack is a plan to get the bill to the floor.

Fifty-nine senators — including 16 Democrats — have signed onto sanctions legislation from Democratic Sen. Robert Menendez and Republican Sen. Mark Kirk. The measure would punish Iran with sanctions if it reneges on an interim nuclear agreement or if that agreement does not ultimately abolish any nuclear-weapons capabilities for Iran.

That count has climbed rapidly since the bipartisan pair introduced their legislation in late December. But now it’s unclear whether that support will be enough to clear the bill’s next major hurdle: Senate Majority Leader Harry Reid.

Reid is siding with the White House, which has put intense pressure on lawmakers not to act on sanctions, arguing it could result in both a nuclear-armed and hostile Iranian state. And without Reid’s backing, supporters of the Menendez-Kirk bill are unsure how to move the measure to the floor.

And for now, sanctions supporters are still mulling their strategy.

“We are talking amongst ourselves. There is a very active debate and discussion ongoing about how best to move forward,” said Democratic Sen. Richard Blumenthal of Connecticut, a cosponsor of the bill. “There are a number of alternative strategies, but we’re deliberating them.”

While Reid has, at least for now, foiled their policy plans, sanctions supporters are still scoring the desired political points on the issue. They can report their efforts to their constituents while blaming Reid for the inaction.

Jon Stewart, comparing these senators to egg-throwing Justin Bieber, is perfectly clear about which “constituents” they are trying to represent: AIPAC and Israel. (It’s a shame that Daily Show writers, having crafted a strong piece then felt compelled to add some “balance” by treating Rouhani’s tweet with scorn: “World powers surrendered to Iran’s national will.” If he can placate his hawkish critics just with a tweet, I’m sure Obama is envious.)

2 thoughts on “What happened to AIPAC’s seventy senators?”