The Guardian reports: The cache of evidence smuggled out of Syria showing the “systematic killing” of 11,000 detainees in Syrian jails may only be the tip of the iceberg, international aid agencies have said.

The International Committee of the Red Cross, various United Nations bodies and Human Rights Watch have repeatedly complained of having next to no access to detainees and being stone-walled by Syrian authorities despite repeated requests to visit infamous detention sites, such as Sayednaya prison in Damascus.

They said Monday’s report by three eminent international lawyers that at least 11,000 victims have been killed while in detention represents numbers in only one part of the country.

“All I know after years of trying to get access is that this is likely to eventually shock the world,” one senior official from an international body told the Guardian, on condition of anonymity. “What we have seen in the [war crimes lawyers’] report broadly reflects what we have pieced together over the past few years.”

Syrian activists say an estimated 50,000 detainees remain unaccounted for. Tens of thousands of Syrians have been held in the country’s infamous detention centres and released, often after months of deprivation and torture.

In reaction to this report, here is a sampling of the comments from readers at The Guardian. While there are a few expressions of outrage, the comments I’ve picked out are fairly representative of the prevailing sentiment.

— “Assad, while not being the best of leaders, is arguably what many Arab countries need in the face of aggressive militant fanatics.”

— “we should keep out of it. We can do no good here. Any attempt to intervene will inevitably result in uncoordinated disaster.”

— “All these allegations just before the peace conference smack of propaganda and manipulation. Obama was so sure that Assad had used sarin until it was shown to be a lie. But, of course, no one in the land of the free would report it (nor the Guardian). Cry wolf too many times and many will be skeptical. The timing of this report and the fact it was sponsored by Qatar is very suspicious.”

— “I supposed they need some Anti-Assad material before the scheduled talks. One last try by Qatar and the Saudi’s to propaganda us into their view. Won’t work.”

— “the west should be backing assad in his fight against the islamists/ as bad as assad might be, he is far better than the islamists/ al qaeda would butcher far more people if they took power”

— “This is nothing to do with us. We have nothing to gain from involving ourselves in this war and we’re in no position to make things better. We need to just leave them to it.”

— “Look, I’m sorry that I’m so cynical, but it’s really not my fault. They lied us into Iraq, twice! Once using the ‘babies being thrown out of incubators’ lie and once using Curveball’s lies. They have already tried to lie us into Syria once, with what looked very much like a false flag sarin attack (in that nobody could provide any real evidence of culpability). Now they are trying a new tack.”

— “I don’t think we can trust any mainstream report on issues in the middle east and elsewhere. There are to many untrustworthy players, Saudis Israel, the US can’t be trusted on Syria. You can’t trust report coming from the other side as they are not much better. Best we stop interfering in other countries affairs and most of these problems will resolve themselves.”

— “Whilst I have no doubt that the Syrian government is responsible for atrocities in Syria, I have misgivings about this report. It seems to have come out at a very convenient time, just before the peace talks, and is sponsored by the Qatar government (who back the rebels), so is hardly subjective. Seems to be another attempt to persuade Western governments to start yet another war.”

— “Haven’t we seen regimes we backed torture their population and kill thousands without a murmur of objection from our political masters? It’s time we kept out of this type of conflict. We only make things worse for the innocents.”

Never has a war been fought in which so many lives were lost, so many families displaced, and so much destruction wrought, while an antiwar “movement” was seized by one concern alone: that the West not intervene.

Of course this isn’t really an antiwar movement since with no Western government on the brink or even considering military intervention, there is nothing to protest against.

Neither is it really antiwar, since there is much less interest in ending this war than there is in making sure it not become our war.

Look at the level of public interest in Syria as measured through Google searches since the uprising began in March 2011. The only major spike came after the Ghouta chemical attack when briefly there was the prospect of very limited Western military intervention. For about three weeks, Syria — or to be more precise, the fear of war — overshadowed America’s fascination with Justin Bieber.

I used to think that being opposed to war had something to do with wanting to make the world a better place, yet in recent years the deeply conservative underpinnings of this orientation have become increasingly evident.

When Western opponents of war look at Syria or pretty much anywhere else in the Middle East, the answer to the question — am I my brother’s keeper? — appears to be a resounding, no.

Granted, whether it’s in the geopolitical realm or within the narrow sphere of ones own life, it is always necessary to balance ones aspirations with a realistic assessment of ones capabilities. And the principal of do no harm applies just as well to international affairs as it does to medicine.

But to be able to casually dismiss a report on “industrial-scale killing” seems to have less to do with expressing humility in the face of what looks like an intractable conflict and more to do with a very mundane mentality: I’ve got enough problems of my own; I don’t need to hear about yours.

Yet it’s not as though anyone reading about the latest accounts of Syria’s horrors in The Guardian has been asked to do anything. It’s not as though we have to decide whether we might be willing to make some personal sacrifice and, for instance, accommodate some refugees.

We do indeed live in a world where for vast numbers of people the demands of everyday life make it next to impossible to pay attention to the plight of people living far away.

There are however significant numbers of people who profess a concern about social justice and in the name of some kind of global conscience, champion causes such as supporting the rights of Palestinians, yet for many, their internationalism inexplicably halts at the Syrian border.

In the name of not “starting another war” (no one bothers to explain how it’s possible to start a war half way through), the antiwar camp is content to absolve itself of all concern on the basis that in Syria there are supposedly no “good guys”; that to oppose Assad is to support al Qaeda; and because it’s not our job to solve the world’s problems. 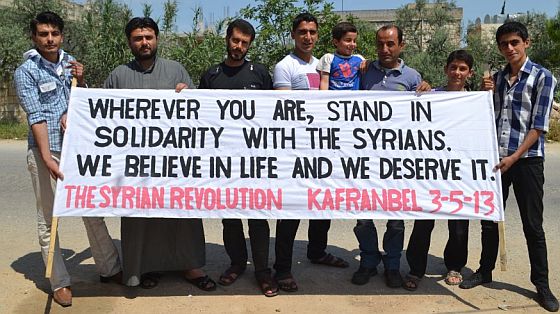