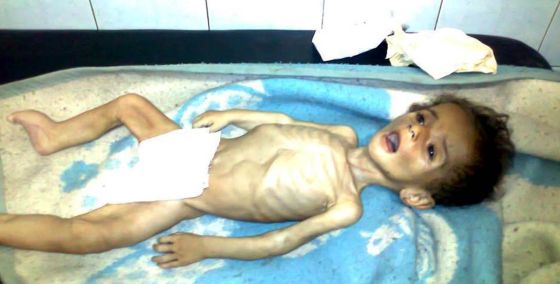 NBC News reports on starvation and malnutrition in Yarmouk Camp, a Palestinian refugee camp just south of Damascus, whose population has been trapped under siege for months and where at least 89 people have died of starvation. In Yarmouk, “people are eating cats, grass and cactus they are so hungry.”

Not our problem. If Syrians can’t solve their own problems – too bad. Cats, rats, dogs – let them eat what they want.

Psychopaths, when shown images of people in distress, exhibit low affective empathy, which is to say they have an inability to respond emotionally appropriately to the suffering of others.

If the comment I cited was unusual, it might sound like “Pessimist” is a psychopath. Yet the sentiment — this isn’t our problem — pervades this thread of hundreds of comments.

“Let those folks climb out of their own cesspool, if they’re willing.”

“pics of starving children? really? since when did syria care about its children?”

The phrase, not our problem, appears thirty times just on the first of nine pages of comments.

There’s nothing new and nothing uniquely American about indifference. But the response to Syria goes far beyond indifference and has become a kind of angry callousness — tied to a legitimate rejection of another American war in the Middle East.

Yet even in this — wars in Iraq and Afghanistan that most Americans now see as having been futile — what appears to be the most regretted feature of these military adventures is their cost in “blood and treasure” to America.

The populations in those countries seem to be viewed by many as being just as undeserving of American sympathy as people starving in Syria.

What do all these people — the people whose suffering can be ignored — have in common?

They are Muslims and over the last decade while Muslims have been the primary target of American aggression overseas, the demonization of Muslims in American society has inexorably grown.

In an era where political correctness has had the broad effect (of questionable benefit) of tempering blunt expressions of bigotry, Islamophobia is not only prevalent but those who harbor such feelings appear to regard them as perfectly legitimate. Americans who have negative views of Muslims recognize that there are relatively few societal penalties for expressing these views.

“ohio state buckeyes fan” responds to “Hope-295312” — a commenter who appeals for an expression of empathy.

HOPE: These same folks you have such compassion for were the very same folks that were dancing in the street of Damascus after 9/11, these are the same folks that have cheered on every terrorist attack committed against the west. Frankly not our war, not our concern and if your truly had any desire for a safer world and for a peaceful Syria than you should be rooting for a war of extermination between the sides waging the civil war.

Hatred directed at a foreign other provides glue that can hold weak societies together. But the indifference many Americans express towards the suffering of children starving in Syria is not merely a reflection of a pervasive xenophobia; it also mirrors the extent to which a society that elevates the value of self-interest will also be a society in which we have a little willingness to care for each other.