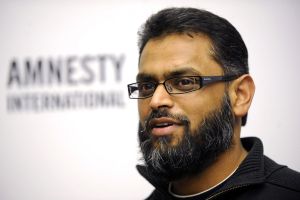 The Toronto Star reports: The arrest in Birmingham of Moazzam Begg, a former Guantanamo Bay detainee and outspoken critic of Britain’s counterterrorism policies, has sparked a debate about foreign support for Syria’s conflict and accusations that the activist’s detention was politically motivated.

Begg, a 45-year-old British citizen who spent more than three years in Guantanamo before being released in 2005 without charge, was one of four people arrested in a terrorism sweep by West Midlands police Tuesday on suspicion of facilitating terrorism overseas.

Although it is rare to identify detained suspects who are not charged, West Midlands police confirmed Begg’s arrest to local media due to “high public interest.”

“All four arrests are connected,” Detective Superintendent Shaun Edwards told The Guardian, referring to Begg and a 36-year-old man, a 44-year-old woman and her son, aged 20, who were also taken into custody. “They were all preplanned and intelligence-led. There was no immediate risk to public safety.”

He added: “We continue to urge anyone planning to travel to Syria to read the advice issued by the Foreign Office.”

Begg, who was reportedly also questioned on suspicion of attending a terrorist training camp, is the high-profile director of the London-based organization CAGE.

Through his advocacy work, he has met with foreign ministers, deputy prime ministers and Britain’s Lord Chancellor. According to a cable released through WikiLeaks, the U.S. ambassador to Luxembourg once commended Begg as an ally in the sensitive task of settling Guantanamo detainees whom the Pentagon has cleared for release.

Begg has found himself targeted by Western security services in the past and recently had his passport confiscated. In 2011, he was barred from boarding a direct flight from London to Toronto, where he was scheduled to give a speech. He was told he was being turned back in case the flight was rerouted to the U.S. [Continue reading…]