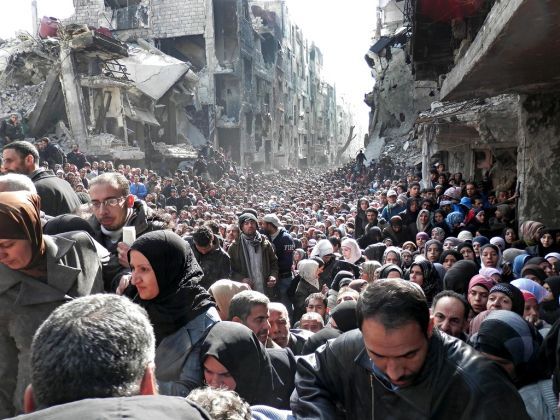 The Guardian reports: It is a vision of unimaginable desolation: a crowd of men, women and children stretching as far as the eye can see into the war-devastated landscape of Yarmouk refugee camp in Damascus.

A photograph released on Wednesday by the UN agency for Palestinian refugees, UNRWA, shows the scene when thousands of desperate Palestinians trapped inside the camp on the edge of the Syrian capital emerged to besiege aid workers attempting to distribute food parcels.

More than 18,000 people are existing under blockade inside Yarmouk, enduring acute shortages of food, medicines and other essentials. Much of the camp has been destroyed by shelling, and attempts to deliver aid to those inside have been hampered by continued fighting in Syria’s three-year-old civil war.

United Nations workers have delivered about 7,000 food parcels over recent weeks, following negotiations between the Syrian government, rebel forces and Palestinian factions within the camp. The most recent delivery, of 450 parcels, was on Wednesday. The UN acknowledges that the level of aid is a “drop in the ocean”. [Continue reading…]