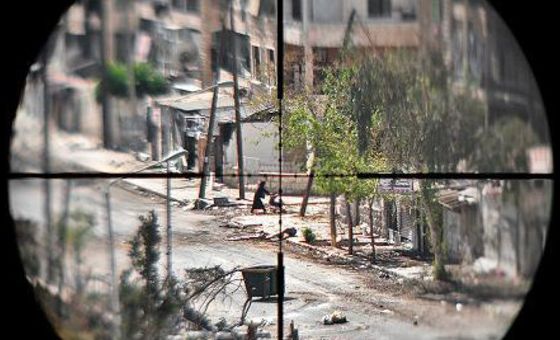 Zaher Sahloul writes: In the last day of my medical mission to Aleppo in October 2013, I was asked to examine a toddler who had arrived at our hospital after being shot in the head by a sniper one hour earlier. His name was Hamza Ramadan, and he was just three years old. His heart was beating, but he exhibited no other signs of life. I was told that snipers had targeted Hamza, his mother, and his sister as they tried to sprint through the passage separating the opposition-controlled east side of Aleppo to the regime-controlled west.

That two-block street has now come to be known as “The Corridor of Death” (“Maabar Almawet” in Arabic). Snipers perched on the roofs of three regime-controlled buildings at the end of the passage have turned the place into a killing ground. Hamza’s mother and sister were killed instantly. Their bodies were rushed to the hospital, along with Hamza’s, in the back of a car owned by bystanders. (Ambulances are a luxury in Aleppo. According to the World Health Organization, more than 75 percent of Syria’s ambulances have been damaged in the conflict.)

Since the start of the first demonstrations in 2011, the Syrian regime has tried to cast the whole opposition as extremists and terrorists. This has been an effective strategy, playing into the fears of al Qaeda and jihadists that are prevalent in the United States and Europe. The more recent influx of foreign jihadists into Syria has added some legitimacy to such claims. The Western media has fallen into the regime’s trap, portraying the conflict as a fight between the government and terrorists — and sometimes implicitly justifying the regime’s crimes against its own people. The reality, as I saw it, is far more malicious: The government of President Assad is waging war not only against an armed enemy, but also against its own population.

My medical mission to Aleppo was organized by the Syrian American Medical Society (SAMS), a group dedicated to helping the victims of the war. My aim was to serve the victims of war in that ancient city and world heritage site, now the epicenter of aerial bombing and shelling. No amount of disaster management or trauma care training could have possibly prepared me for the brutal reality of the hospital I visited. At the hospital, which was code-named “M-1” for security reasons, the vast majority of our patients were local residents injured by shrapnel from barrel bomb attacks or indiscriminate shelling from fights between rebels and regime troops. But many, like Hamza, were civilians targeted in the most direct and ruthless way possible: by snipers.

The use of snipers gives the lie to government propaganda. Snipers know exactly whom they’re shooting. When snipers look through their telescopic sights at someone’s head or chest, they know if the target is a child or a fighter. According to the Aleppo Civilian Medical Council, snipers in the “Corridor of Death” gun down five to 20 civilians every day. Most of the victims die instantly. Those who survive are likely to suffer lifelong disabilities: amputations, loss of an eye, or spinal cord injury and paralysis are just a few on a long list of possibilities. The Oxford Research Group reports that 11,420 children (aged 17 and under) were recorded killed in the Syrian conflict by end of August 2013, from an overall total of 113,735 civilians and combatants killed. One in four of those child deaths were caused by small arms fire, including children targeted and summarily executed by snipers. Hamza was one of those unlucky children. [Continue reading…]