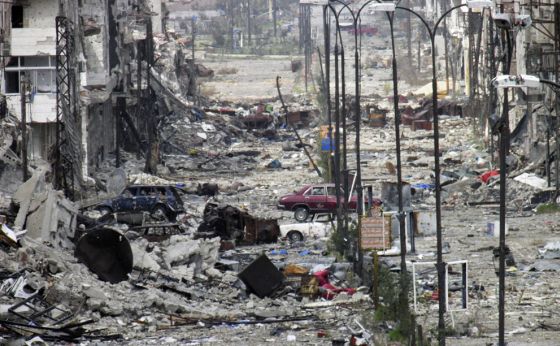 Click the photo above to see 36 more grim reminders of the devastation caused, above all, by the Assad regime’s unwillingness to accede to the legitimate demands of the Syrian people for freedom and democracy.

From the outset of what was initially a peaceful uprising, Assad made it clear that had no reservations about using violence to crush political dissent, and yet for many Western observers who had just been cheering on an ostensibly peaceful revolution in Egypt, Syria’s revolution became unpalatable as soon as the opposition picked up weapons.

Yet remember these words: “Where choice is set between cowardice and violence, I would advise violence. I prefer to use arms in defense of honor rather than remain the vile witness of dishonor.”

That was the choice most Syrians faced: to either cower in response to ruthless authoritarian rule, or to fight back.

And who offered this advice to use arms? Mahatma Gandhi.

The cost of fighting has been higher than any country should ever bear, but the power to choose a different course has rested in Bashar al Assad’s hands from day one. This catastrophe did not have to happen.