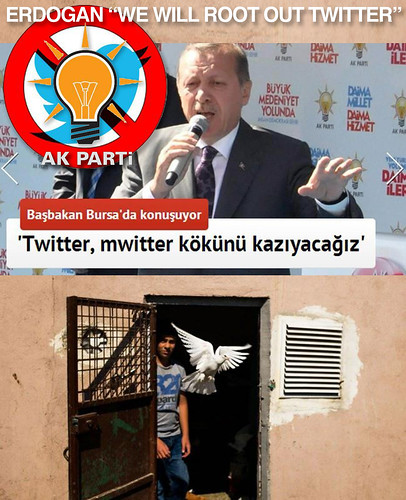 Today’s Zaman reports: Hours after Turkish Prime Minister Tayyip Erdoğan threatened to shut down Twitter and other social media platforms, government has restricted access to Twitter in most parts of the country, citing a court ruling on Thursday.

During a rally, Erdoğan said he did not care about the international response, his latest outburst in an increasingly bitter election campaign.

Hours after his threat, the Turkish government rushed to partially restrict access to Twitter, sparking public outrage on social media as people sought ways to avoid the restriction.

Thousands of tweets flooded in Twitter, vehemently criticizing the government ban. With partial ban on Twitter, Turkey now stands along with countries such as N.Korea, China, Saudi Arabia, Iran and Russia on internet freedom. [Continue reading…]