On Democracy Now! today, Amy Goodman provided Seymour Hersh with an opportunity to summarize the contents of his article which appeared at the London Review of Books yesterday.

The only juncture in the interview where Goodman challenged Hersh on the substance of his claims, came when she cited a post written by Scott Lucas which appeared at EA Worldview yesterday. In that post, Lucas reiterated a point he had made last December in response to Hersh’s first article on the chemical attack, referring to one of the many reasons that the scale of the attack was an indication that only the regime had such capabilities:

Reports on the day and subsequently indicated that 7-12 sites were attacked with chemical agents at the same time. In other words, whoever was responsible for the attacks launched multiple surface-to-surface rockets with chemical payloads against opposition-held towns in East Ghouta and one town in West Ghouta, near Damascus.

In part of his response to this challenge, Hersh said:

You have a UN report, you have this independent report, saying [the missiles used in the chemical attack] went no more than one or two kilometres and so I don’t know why we are talking about multiple launched rockets. These were homemade weapons and it seems very clear to most observers, as I say even to the UN team that did the final report — the UN because of whatever rules they have, wasn’t able to say that, who fired what, they could just say, they could just describe the weapons and never make a judgement, but I can tell you, I quote somebody from inside that investigation unit who was very clear that the weapons [that] were fired were homemade and were not Syrian army. This was asked and answered.

Hersh has a habit of making stronger claims in interviews than he is willing to make in writing.

Although on Democracy Now! he said “I quote somebody from inside that investigation unit” in the article itself he merely quotes a “person with knowledge of the UN’s activities.”

If this person was actually inside the investigation unit, why didn’t Hersh put that in print?

In the interview, Hersh says this person “was very clear that the weapons [that] were fired were homemade and were not Syrian army,” yet quoting this individual he wrote: “Investigators interviewed the people who were there, including the doctors who treated the victims. It was clear that the rebels used the gas.”

Note: Hersh’s source refers to “investigators,” not “our investigation” — a suggestion that the source was not in fact inside the investigation — and the source makes no direct reference to the construction method of the weapons.

In tune with the interests of his audience, Hersh prefers to tell political stories. Technicalities serve as nothing more than stage props and for this reason, it should come as no surprise that his televised engagements are generally solo performances, which is to say, he doesn’t get interviewed alongside experts who could quickly expose the weakness of his arguments.

For instance, a pillar of the argument that Hersh is making about the chemical attacks in Ghouta was that the weapons and the sarin they contained were homemade. 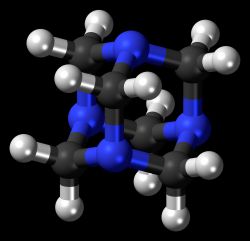 Now if Amy Goodman had wanted to pose a really tough question to Hersh she could have asked: How do you explain the presence of hexamine found on the remains of the missiles used in the chemical attacks?

That’s not the kind of question Hersh is likely to have thrown at him by Goodman or any other interviewer since neither he nor the interviewer would be likely to understand its significance.

Still, when the subject is chemical weapons and the media is able to see whether Hersh’s claims can withstand expert analysis, then that is exactly how his reporting should be tested.

It’s safe to assume that Hersh will never divulge the identity of any of his sources and so their credibility cannot be separated from his credibility. But Hersh’s assertion that the weapons and warheads used in the attack were homemade and that they lacked the identifying characteristics of Syrian army weapons, is a substantive claim that has to be supported by evidence.

This is worthless. For Hersh to attest to the reliability of this evidence by citing his own source’s claim that “the Russian who delivered the sample to the UK was ‘a good source – someone with access, knowledge and a record of being trustworthy’” is a joke.

Russia is an ally of Syria. The whole point of having UN weapons inspectors gathering evidence is that they are international and independent.

Dan Kaszeta, a former US Army and US Secret Service specialist on chemical, biological, and radiological defense, last year laid out the reasons why neither al Nusra nor any other non-state actor would have the capabilities to produce sarin in the quantity used in the Ghouta attacks.

Having presented the technical reasons why rebel-produced sarin was highly implausible, Kaszeta went on to make an important discovery about a unique feature of the sarin produced by the Assad regime — something that has never been observed before: the use of hexamine.

Sarin used in chemical weapons contains hydrogen flouride — “one of the most corrosive chemicals in existence.” Although hexamine has a diverse array of applications, Kaszeta suspected that Syria was using it as the acid reducer in sarin to mitigate the corrosive effects of hydrogen flouride. That suspicion was confirmed by the UN/OPCW inspection mission.

Ake Sellstrom, the head of the mission, was interviewed by CBRNe World magazine in February and asked:

CBRNe World: Why was hexamine on the list of chemical scheduled to be destroyed – it has many other battlefield uses as well as Sarin? Did you request to put it on the list or had the Syrian’s claimed that they were using it?

Sellstrom: It is in their formula, it is their acid scavenger.

Add these facts together and there can be little doubt that, as Dan Kaszeta says, “the Assad regime did the wicked deed.”

Then again, who wants to hear about hexamine when instead they can listen to Seymour Hersh spinning tales about false flags?

13 thoughts on “Does Seymour Hersh understand how hexamine fits into Syrian sarin?”