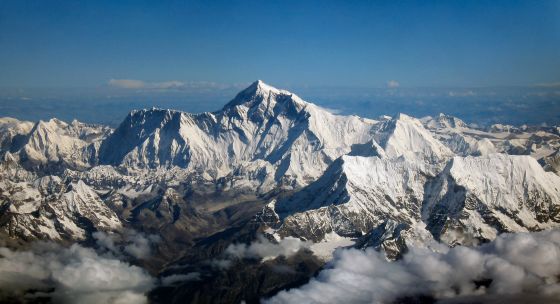 Two days after 16 Sherpas lost their lives in the service of a party of Everest-climbing tourists, Jon Reiter, one of the climbers, wrote on his blog:

This is a tough time for everyone here on the mountain but accidents, and even death, are part of the deal. If climbing Everest were easy and risk free, I suspect we’d all take a hike to the top of the world. The price that has been paid over the last 24 hours is a large price indeed. I guess the climbing Sherpa as well as all of us western climbers need a few moments or days to re-evaluate what’s worth what in this life.

Early this morning I read a comment written about me where the author said, “I hope he finds what he’s looking for up there.” I appreciated that notion because it got me to thinking about what am I looking for, and I think I have found it whether I see the summit of Everest or not. I’m looking for an adventurous life. I want to see the whole world and all of its people. I want to lay in my death bed and know that I did and saw all that I wanted to in the time I spent spinning through space on this ball of mud. I want to know that I lived fully! So far in this life the things that I regret the most are the things I didn’t do; the things I didn’t have time for; the situations that scared me to much. I want to push myself to do and see until I can’t anymore. I want to inspire my two boys to aim high, to take from this world and give to mankind more than they can imagine now. I hope I have a lot of life left to live and I hope I keep finding what I’m looking for. I’m glad my friend brought this topic up because I needed to remember today just why I’m here.

I’m so flattered that so many of you are following this adventure. It’s awesome that I get to follow my dreams and I remember everyday that all of this would be hollow and meaningless without all of you being part of my life.

Please send positive thoughts or prayers to the families of our fallen Sherpa brothers.

Reiter might be an experienced climber, yet like his companions who had paid $48,500 each to be guided up the world’s tallest mountain, he approached this adventure with the mindset of a tourist.

“We were moving up to Camp 1 just after dawn when we heard that ‘crack,’” said Reiter, 49. “I thought ‘wow, that’s a big one.’ My first thought was to film it, and I reached for my camera. But the Sherpa yelled to get down.”

Freddie Wilkinson describes how almost a century ago the first fatalities occurred on Everest:

On a bright afternoon in June of 1922, the Mount Everest pioneer George Mallory was leading a group of 17 men tied together in three separate rope teams toward the North Col of the mountain when he heard an ominous sound, and turned to see an avalanche fracturing the steep slope above them.

Mallory and his rope mates were spared the brunt force of the slide, but the two teams following them — comprising 14 porters from Darjeeling, India — were swept down the mountain. Seven died. Mount Everest had claimed its first known victims.

One of Mallory’s companions, Howard Somervell, would later write, “I would gladly at that moment have been lying there dead in the snow, if only to give those fine chaps who had survived the feeling that we had shared their loss….”

On Friday, about 6:30 in the morning, another avalanche rumbled down Everest. This one caught a group of 25 climbers at 19,000 feet near the top of the notorious Khumbu Icefall, a frightful jumble of seracs and crevasses, killing at least 12 as of Friday in the worst reported disaster in the mountain’s history.

Although commercially organized groups make up the overwhelming majority of Everest expeditions today, not a single international client or guide was caught in the avalanche. The victims were Nepalese. They were carrying supplies to aid their employer’s clients, who pay commercial outfitters tens of thousands of dollars to get to the top of the world’s tallest mountain.

Today, as was the case in Mallory’s day, it is these professional climbing Sherpas who bear a disproportionate amount of the risk of Himalayan climbing. In fact, the odds may be worse for them than they were in the days of those grand British expeditions.

Mallory was racked with guilt over the 1922 tragedy and resolved never to let a team of porters climb without a British mountaineer sharing the same rope. Eric Shipton, another legendary British alpinist whose 1951 reconnaissance pioneered the route through the icefall, paving the way for the first ascent of the mountain two years later, found it ethically questionable to ask the climbing Sherpas to venture into the icefall to help Westerners make it to the top.

At least when Edmund Hillary and Tenzing Norgay became the first two men to reach the summit in 1953, Hillary was gracious enough to immortalize that moment in history with a photograph of Tenzing rather than himself.

But implicit in the very idea that this could be viewed as a human accomplishment is the suggestion that it would never have happened without the adventurous spirit of Western pioneers — men such as Hillary who would proclaim afterwards, “we knocked the bastard off,” another of nature’s challenges having been duly conquered.

What was one to infer about the fact that the people who had lived at the foot of the mountain for centuries, had not on their own initiative taken on the venture of its ascent?

Certainly, neither Hillary nor any other foreign mountaineer has been able to climb Everest without relying on the courage, perseverance, and strength of Sherpas.

Was the only thing the Sherpas lacked, equipment?

But maybe they didn’t lack anything at all.

Maybe the Sherpas possessed something that the Westerners lacked: a sense that Everest could be appreciated as much, or even more, from below rather then above — that the mountain called for reverence rather than conquest.

After all, what kind of man would pretend he is greater than a mountain?

Update: Ed Marzec, 67, a retired lawyer from Los Angeles who is currently at base camp, writes:

The Sherpas have voted to cancel all summit attempts of Everest this year as a memorial to the worst Everest disaster yet. I, along with many other climbers, believe this to be a proper memorial even though I have been working on this summit for 2 years, I am willing to abide by their decision since I am only a guest here. However, although the big American commercial tour operators have agreed to follow the vote of the Sherpas, they are working everyday to change the vote and wait until they think the Sherpas will get over it…..sounds so familiar. I am shamed by our greed and embarrassed by our lack of compassion.

5 thoughts on “The challenge of Everest, where vanity overshadows courage”