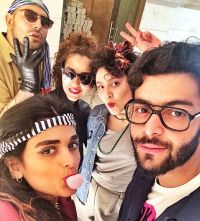 “Thanks for thinking about us,” says Neda, one of the six Iranians arrested for posting a music video for Pharrell Williams’s “Happy” on YouTube, in a message on Instagram. “We’re finally released after three days in prison. We’re waiting for the court date. Thanks a lot for caring about us.”

“My sister and her friends wanted to show the world that we still have moments of happiness, even though we face so many problems in Iran,” said Siavash Taravati, whose sister Reyhaneh was one of those arrested. “They were only showing their happiness and were arrested for that,” he said. He told Iranwire that his sister had not left the court, but it had been announced that she would be released after her family paid a bail of 40 million toman. Others in the video were due for release after settling a bail of 30 million toman (approx. ten-thousand dollars).
[…]
Taravati also told IranWire that although the group’s release documents had been signed and the group had received official warnings, they were likely to be summoned to the court again. He also said that police authorities were still going through personal items that were confiscated at the time of their arrest. Items included mobile phones, computers and cameras taken from their homes.

New details have emerged about the treatment of the six Tehran “happy” youth while in detention. According to a source close to the group, police raided the home of artist and photographer Rayhaneh Taravati three days ago. The officers covered the peephole of the door so that their faces would be obscured, and Taravati opened the door. Armed officers streamed inside, bashing and damaging everything in sight, videotaping all the while. Taravati’s paintings and photographs were destroyed.

They took the group to the Vozara police station, where they were not permitted to use toilet facilities, and were transferred to solitary confinement on the second day. Police interrogated the group extensively about their video clip and comments to foreign media, including this publication. During their detention the young women were forced to strip naked and perform squats in front of female police officers.

The International Campaign for Human Rights in Iran said:

These arrests are indicative of growing struggle in Iran between hardliners, who dominate the judicial and security arms of government, and more moderate forces within society, supported by the Rouhani administration. Social media, and the freedom to use it to communicate and express oneself, is a key arena in which this struggle is being played out. Hardliners are keen to demonstrate their continued strength and ward off any move toward a domestic opening, given Rouhani’s huge electoral win.

Iran ayatollah Marakem Shirazi weighs in on "Happy" arrests: "Islam is against laughing loudly for no reason." Smiles are fine though. 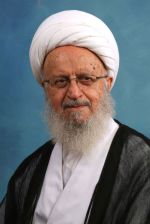 Apparently the ayatollah is unaware that the makers of the “Happy” video were laughing loudly for a reason:

“We want to tell the world that Iran is a better place than what they think it is. Despite all the pressures and limitations, young people are joyful and want to make the situation better. They know how to have fun, like the rest of the world.”