A profile of the ISIS leader, Abu Bakr al-Baghdadi, who is now the self-declared Caliph Ibrahim, included these details about his past:

His friends remember him as polite and rather quiet. In fact, few took notice of the bespectacled student who would sit at the back of the classroom.

The only time he shone was on the football field, playing for the team from the local mosque where he would also occasionally, though not very impressively, lead the congregation in prayer.

“He was the Messi of our team,” said Abu Ali, a fellow player and worshipper at the mosque, making comparison with the Lional Messi, the Argentinian striker. “He was our best player.”

If Baghdadi’s zealotry was fueled in part by his own unfulfilled ambitions — a form of psychological corruption that could be described as the metastasization of talent — maybe he traded in fantasies about playing in the World Cup in exchange for the higher goal of becoming Caliph.

Whatever the motive, he now is apparently intent on making sure his followers won’t get distracted by the 2018 World Cup.

A purported letter by the Islamic State, the jihadist group that controls chunks of Syria and Iraq, has warned world soccer body FIFA not to hold the 2022 World Cup in Qatar, reviving concerns first raised in a FIFA security assessment warning two weeks before it was awarded the tournament that there could be a high risk of terrorist attacks.

The letter, first published on Alplatformmedia.com, a jihadist website, and reprinted in an Egyptian newspaper, suggested that soccer would be banned in areas controlled by the group because it constituted “a deviation from Islam.” The letter further indicated that conservative, energy-rich Gulf states were on the target list of the Islamic State, which has conquered parts of northern Iraq with lightning speed and declared a caliphate in territories it controls.

The letter, if genuine, comes amid heated Islamist debate about whether soccer is a legitimate sport according to Islamic precepts; the targeting by some Islamist groups, including the Islamic State, Somalia’s Al Shabab and Nigeria’s Boko Haram of soccer fans; and mounted controversy about the integrity of the Qatari bid to host the World Cup.

Anyone who happens to have watched the current World Cup on the BBC might — like me — have been perplexed by a detail in the iconography they have used for promoting Brazil 2014: toy footballers including one with no head. Another threat from ISIS? 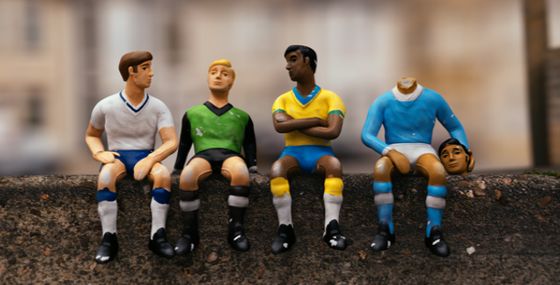