Update: International Business Times has corrected its earlier report (the one on which this post was based and which is excerpted below):

Germany and Arsenal superstar Mesut Ozil’s representative has denied claims that the star was set to donate his £350,000 [$600,000] World Cup winnings to the children of Gaza following his country’s triumph in the global spectacle.

“The claim that Mesut donated money to Gaza is not true,” said the midfielder’s represenative Roland Eitel.

“Maybe in the future, who knows? He donated money to causes in Brazil and he is now on holiday.”

My comment: Why did International Business Times publish this report in the first place if they hadn’t verified that it was correct? IBT is ranked as fourth-most visited website among business news publications. It’s now put itself in that dubious category of websites which publishes interesting stories that happen to be false. Those of us who sift through hundreds of news stories every day don’t have the time or resources to do what people who claim to be news reporters should be doing themselves.

Given the prevailing Islamophobia, continuing irrational fears of terrorism, and the bias of the mainstream media, along with the influence of End Times mythologies among evangelicals, it’s hardly surprising that public opinion in the U.S. remains skewed in this way.

The demographic segment where greatest support for Palestinians can be found, however, is among the religiously unaffiliated 18-29 age bracket. That also, I think it’s reasonable to assume, happens to be the group of Americans who have watched the World Cup most enthusiastically over the last five weeks.

Mesut Ozil’s gesture will resonate deeply among young people who find little to respect in the world run by their hypocritical elders. 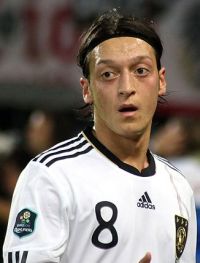 International Business Times reports: Germany and Arsenal superstar Mesut Ozil is to donate his £350,000 [$600,000] World Cup winnings to the children of Gaza following his country’s triumph in the global spectacle.

As the conflict in the Middle East rages following a failed ceasefire, Ozil is set to give the £237,000 bonus he received for helping Germany win the final, and the £118,000 he received for Germany’s semi-final win, to the occupied territory. He is however yet to confirm the actual beneficiaries of his largesse.

Ozil is of Turkish descent and a practising Muslim who recites the Quran before games. He controversially opted not to fast during the tournament, which fell in the holy month of Ramadan in which Muslims fast from dawn until sunset.

According to the Middle East Monitor, Ozil caused controversy when he declined to shake a Fifa official’s hand because of his support for Israel.