It used not to be such a rarity — that a top government official would resign on a matter of principle — yet in this century it has become virtually unheard of.

In her letter to Prime Minister David Cameron, Sayeeda Warsi wrote: “I have always said that long after life in politics I must be able to live with myself for the decisions I took or the decisions I supported. By staying in Government at this time I do not feel I can be sure of that.”

The Guardian reports: Lady Warsi, the senior Foreign Office minister, has resigned from the government in protest at its policy on Gaza, describing it as “morally indefensible”.

Warsi announced her departure on Twitter on Tuesday, saying: “With deep regret I have this morning written to the Prime Minister & tendered my resignation. I can no longer support Govt policy on #Gaza.”

In her resignation letter, Warsi said the government’s “approach and language during the current crisis in Gaza is morally indefensible, is not in Britain’s national interest and will have a long term detrimental impact on our reputation internationally and domestically”.

She said the UK’s stance was “not consistent with the rule of law and our long support for international justice”, adding: “The British government can only play a constructive role in solving the Middle East crisis if it is an honest broker and at the moment I do not think it is.” [Continue reading…]

This is Warsi’s resignation letter: 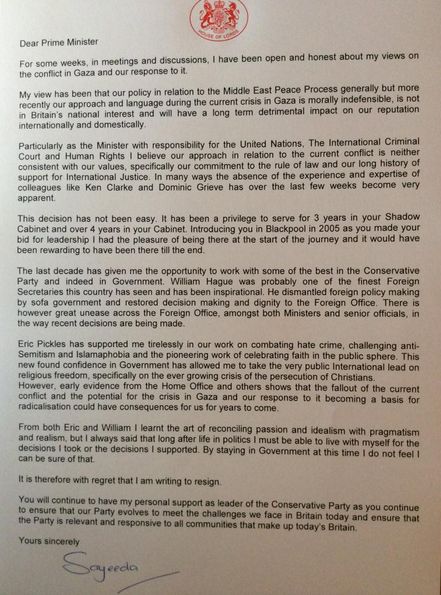