CODEPINK asks: “Why does our President want to take sides and get involved in a civil war? The US is not the target of ISIS, but if we become involved, we will be.” 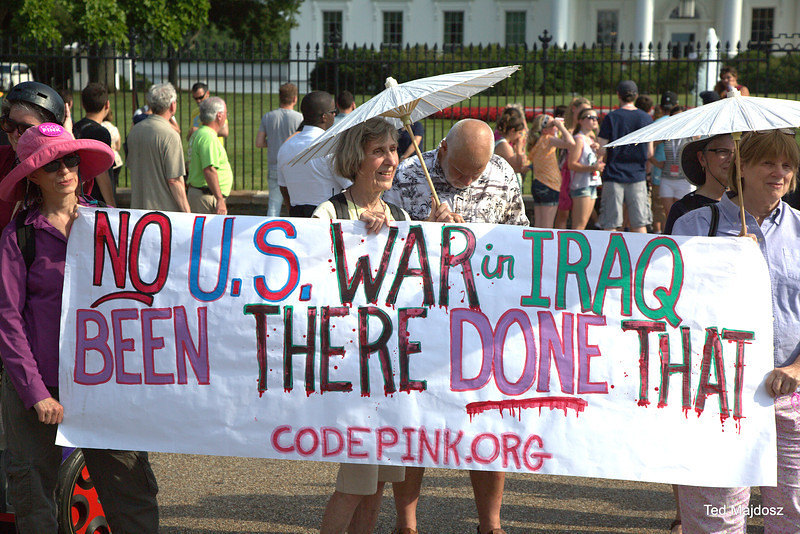 A lot of Americans these days, some of whom regard themselves as impeccable humanitarians, have formed the conviction that when it comes to the Middle East (or pretty much anywhere else in the world), intervention by the United States — especially military intervention — can do nothing but harm.

President Obama’s concerns about the Iraqi humanitarian crisis and the safety of US personnel can be solved without dropping bombs. Helping the besieged civilians in Iraq should be an orchestrated international effort, not carried out just by the US — the country that unleashed the sectarian turmoil in the first place. (CODEPINK)

Tens of thousands of Iraqis fled from ISIS, taking refuge on a mountain top where they have no food, water, or shelter. How long could anyone survive in these conditions when daytime temperatures often exceed 100F?

By the time CODEPINK’s wished for international effort could be orchestrated, thousands of those in need of help would be dead.

Channel 4 News spoke to a Yazidi refugee, Barakat al-Issa, who is trapped in the Sinjar mountains: “the situation is very tragic, more than 100 thousand people are trapped in the mountains here, in need of water and food.”

The Americans and Turkish have carried out air drops of aid, but the effort was not sufficient said Mr al-Issa: “They are saying that planes are dropping aid, but this aid is only getting to some 5 per cent of the people who are trapped here, because of the mountainous terrain.”

“People are waiting here for international forces to intervene, in the hope that this will become a safe haven for aid to be delivered.”

“Most of the people here are civilians and they hope a peacekeeping force will come from Iraq or Nato.”

He accused the Islamic State militants of kidnapping at least 500 Yazidi women, whose fate remains unknown, and said that dozens of families had been murdered in the south of the Sinjar mountains as they tried to flee. He also repeated allegations that militants had been seen executing women and children.

To advocate neutrality in this conflict seems indicative of either being willfully deluded about the nature of ISIS or the result of simply not paying attention to what has been happening in Syria and Iraq over the last two years.

ISIS, or the Islamic State as it now prefers to be known, is utterly uncompromising. These men have chosen to fight a war that they will either win or lose — don’t expect them to ever send a delegation of negotiators to Geneva or start talking about how they want to live peacefully side by side with anyone. Coexistence is not part of their vocabulary.

Anyone in CODEPINK who is averse to taking sides should watch the video below — or at least as much of it as they can stomach — to witness how these jihadists whose passion for killing has no limit choose to portray themselves.

Some of the latest military action in Iraq appears to already by paying off but the situation remains dire, as Rudaw reports:

Local officials said today that 10,000 Yezidis who were stranded on Mount Shingal for one week were rescued and settled in the town of Zakho.

Medical teams and aid organizations in Zakho have rushed in to assist the rescued families, said Rudaw reporter.

“We have also cleared about 30 kilometers of the ISIL forces in order to open a road for those families,” said Kocher, who currently leads a Peshmerga unit at Sinune village near Shingal.

Kocher said that the rescued civilians were transported to the Kurdistan Region through Rojava (Syrian Kurdistan) which is under the control of Kurdish forces known as the Peoples Protection Units (YPG).

Barakat Issa, Rudaw reporter on Mount Shingal said that the number of Yezidis stranded on the mountain is higher than initially reported. He said that nearly 100,000 people are hiding on the mountain.

Issa said that in the past few days 60 children and elderly have [died] … of hunger and thirst while there is fear that Islamic militants controlling the town of Shingal and other villages have massacred hundreds of others.

Stephen Walt proposes a course of inaction for the U.S. in the Middle East on the grounds that U.S. intervention never has its desired effects, but he adds this caveat:

[T]his argument would not preclude limited U.S. action for purely humanitarian purposes — such as humanitarian airdrops for the beleaguered religious minorities now threatened with starvation in Iraq. That’s not “deep engagement”; that’s merely trying to help people threatened with imminent death. But I would not send U.S. forces — including drones or aircraft — out to win a battle that the Iraqi government or the Kurds cannot win for themselves.

So the anti-interventionist “humanitarian” perspective is this — if I understand it correctly: we should try to make sure the Yazidi do not starve to death on the mountaintop. If, however, they manage to come back down only later to be slaughtered by ISIS, that’s their problem.

1 thought on “Send them parasols?”