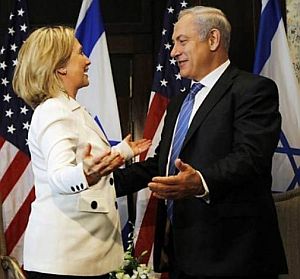 In case anyone has the slightest doubt whether Hillary Clinton is running for president in 2016, read her interview with Jeffrey Goldberg in the Atlantic.

She dutifully supports every position the Israel lobby demands and even deftly conjures up a rhetorical connection between jihadists and the nuclear threat from Iran, introducing a piece of non-proliferation jargon into counterterrorism when she refers to the breakout capacity “of jihadist groups that can affect Europe, can affect the United States.”

For a few neocons in Washington who are indulging in fantasies about their political rehabilitation, much of what Clinton says, must be music to their ears. She shares the view frequently expressed by Israel apologists during its assault on Gaza, that Israel is getting more criticism than it deserves.

When it comes to killing Palestinian civilians, Israel still suffers from its “old PR problem.” Indeed, hundreds of dead children always cause a PR problem.

Hillary Clinton: [W]e do see this enormous international reaction against Israel, and Israel’s right to defend itself, and the way Israel has to defend itself. This reaction is uncalled for and unfair.

Jeffrey Goldberg: What do you think causes this reaction?

HRC: There are a number of factors going into it. You can’t ever discount anti-Semitism, especially with what’s going on in Europe today. There are more demonstrations against Israel by an exponential amount than there are against Russia seizing part of Ukraine and shooting down a civilian airliner. So there’s something else at work here than what you see on TV.

And what you see on TV is so effectively stage-managed by Hamas, and always has been. What you see is largely what Hamas invites and permits Western journalists to report on from Gaza. It’s the old PR problem that Israel has. Yes, there are substantive, deep levels of antagonism or anti-Semitism towards Israel, because it’s a powerful state, a really effective military. And Hamas paints itself as the defender of the rights of the Palestinians to have their own state. So the PR battle is one that is historically tilted against Israel.

JG: Nevertheless there are hundreds of children —

JG: Who do you hold responsible for those deaths? How do you parcel out blame?

HRC: I’m not sure it’s possible to parcel out blame because it’s impossible to know what happens in the fog of war. Some reports say, maybe it wasn’t the exact UN school that was bombed, but it was the annex to the school next door where they were firing the rockets. And I do think oftentimes that the anguish you are privy to because of the coverage, and the women and the children and all the rest of that, makes it very difficult to sort through to get to the truth.

There’s no doubt in my mind that Hamas initiated this conflict and wanted to do so in order to leverage its position, having been shut out by the Egyptians post-Morsi, having been shunned by the Gulf, having been pulled into a technocratic government with Fatah and the Palestinian Authority that might have caused better governance and a greater willingness on the part of the people of Gaza to move away from tolerating Hamas in their midst. So the ultimate responsibility has to rest on Hamas and the decisions it made.

That doesn’t mean that, just as we try to do in the United States and be as careful as possible in going after targets to avoid civilians, that there aren’t mistakes that are made. We’ve made them. I don’t know a nation, no matter what its values are– and I think that democratic nations have demonstrably better values in a conflict position — that hasn’t made errors, but ultimately the responsibility rests with Hamas.