With ISIS being infamous for its brutality, one might assume that anyone joining such an extreme organization would first have to go through the ill-defined process called “radicalization.” Not so.

The story of a young Bahraini man, appearing in the latest issue of CTC Sentinel, is perhaps more representative of the path leading to violent jihad than we might imagine.

Having received a short pep talk in an ISIS office in Syria, this man signs up and then gets instruction on the cause he’s about to fight for and for which he’s ready to sacrifice his life (and the lives of others).

The jihadists grabbing the headlines these days are commonly described as living out a kind of medieval fantasy. I’m not so sure. I wonder whether on the contrary their behavior is symptomatic of a thoroughly modern affliction: the death of the interior life.

When the means through which an individual understands their identity is wholly defined by outward forms and the perceptions of others, they lose their capacity for self knowledge. An inner vacuity then has to be filled by something from outside. Most people can be satisfied with a steady supply of pleasurable distractions, whereas for others their discontent is strong enough to drive them to take up a cause.

In both cases they are running away from themselves. Some run away to Syria. 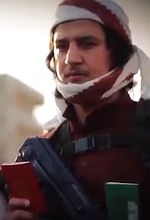 Abu Thar al-Bahrini, from Bahrain, began his story by discussing how he was “not religiously committed” in high school, although he knew that this was “wrong.” After he graduated high school with high grades, his family assumed he would go to medical school. Al-Bahrini, however, had different ideas, as he thought that this was his chance to “repent” and the best way to do that was by joining a Shari`a school in Saudi Arabia. He changed his mind, however, after deciding that the path of studying Shari`a was too long, so he made a decision to join jihad in Syria instead. At the start, al-Bahrini mentioned that he did not “differentiate between the Free Syrian Army (FSA), Jabhat al-Nusra (JN) or ISIL.” His main concern was finding a coordinator to show him the way to Syria, and collecting enough money to cover the expenses of his trip. He started to post photos of the FSA, JN and ISIL on his Instagram account, and during that time he was able to meet with a coordinator in Bahrain who linked recruits with the FSA. At this point, al-Bahrini had only 50 Bahraini dinar (about $130), and the coordinator told him that he needed at least 200 dinar (about $520) to cover his expenses. Al-Bahrini was able to convince only one of his friends to appeal to a wealthy individual on his behalf, and the affluent man agreed to cover all his expenses. For some unidentified reason, the agreement between the coordinator and al-Bahrini fell apart, so he decided to travel to Turkey alone.

“I didn’t know the route to take, didn’t have any recommendation letter, and didn’t know anything about my journey,” al-Bahrini said. “All what I knew is that I should fly to Istanbul airport, from there fly to one of the villages near the [Turkish-Syrian] borders, and then a car would take me from there to enter Syria.”

He flew to Istanbul as planned, purchased a ticket to a “bordering city,” and while he was waiting for the plane he saw “a man with a beard reading the Qur’an, and I knew that he was going to Syria.” Without hesitation, al-Bahrini approached the man, and said to him confidently: “you are going to Syria and I’m going with you.” After a short discussion, al-Bahrini convinced the man to help him. “The man was in touch with coordinators from the Free Syrian Army,” who were supposed to smuggle him into Syria to join JN. They went to a house used by the FSA as a clinic in Turkey, and on the second day a “brother from ISIL came to that house to visit his friends,” al-Bahrini explained. “We told him that we are going to join JN in Idlib, and he offered to take us to JN after we enter Syria.”

Two days after they entered Syria, the same person from ISIL came to them, explained the tensions between the two groups, and suggested they join ISIL instead of JN. They found the explanation complicated, as they knew little about the mujahidin, Usama bin Ladin or any basic jihadist issues, so he took them to one of ISIL’s headquarters so they could learn more about jihad in general and ISIL in particular. After a short interview with the group’s amir of that area, al-Bahrini was sent to a training camp and took military courses and a Shari`a class where he learned “the correct creed.”

Al-Bahrini’s parents were religiously committed, but in his opinion they “were not following the correct creed” because they believed that “jihad now is selective duty and not an individual duty.” Therefore, al-Bahrini decided not to inform them about his intentions to travel to Syria. Once he arrived at the Istanbul airport, al-Bahrini posted a scanned copy of his “ticket and passport on his Instagram account to inform his family about his real intentions to migrate to Syria.” Despite his family’s best efforts, they could not convince him to return to Bahrain. Al-Bahrini concluded his story by acknowledging that his mother and brother, who was a soldier in the Bahrain army, later visited him and were both convinced to join ISIL’s ranks in Syria.

Al-Bahrini appeared in the recently released ISIL video Salil al-Sawarim 4 (Sound of the Swords Clashing 4), in which he delivered a short and powerful speech followed by him ripping up his Bahraini passport and promising to “return to Bahrain not with this useless passport, but marching with ISIL army to liberate all Muslim lands.”