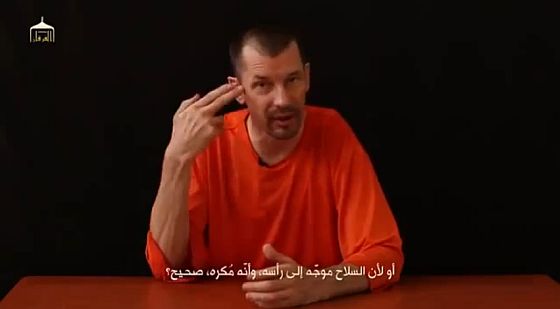 “After two disastrous and hugely unpopular wars in Afghanistan and Iraq, why is it that our governments appear so keen to get involved in yet another unwinnable conflict?”

The question comes from a British journalist, John Cantlie, who has been a prisoner of ISIS for most of the last two years and who has now been compelled to become the organization’s spokesman.

In a newly released video he continues:

I’m going to show you the truth behind these systems and motivation of the Islamic State, and how the western media, the very organisation I used to work for can twist and manipulate that truth to the public back home.

There are two sides to every story – think you’re getting the whole picture? And I’ll show you the truth behind what happened when many European citizens were imprisoned and later released by the Islamic State and how the British and American governments thought they could do it differently to every other every other European country.

They negotiated with the Islamic state and got their people home while the British and Americans were left behind.

It’s very alarming to see where this is all headed and it looks like history repeating itself yet again. There is time to change this seemingly inevitable sequence of events, but only if you, the public act now. Join me for the next few programmes and I think you may be surprised by what you learn.

ISIS is frequently credited for its media sophistication, but its use of a prisoner to serve as a spokesman shows how impoverished the organization must be when from among its thousands of Western recruits apparently there aren’t any fit to represent and articulate the cause they are all fighting for. (Individuals like Moner Mohammad Abusalha from Florida might accurately represent the Western face of ISIS, but they also undermine the organization’s credibility.)

When we are told that several European governments successfully negotiated with ISIS and “got their people home,” no mention is made of ransoms being paid.

While ISIS’s latest message tries to leverage antiwar sentiment in the West, no one should mistake this as a wise warning whose purpose is to forestall another military misadventure.

Put most simply the message is: hold fire, pay up, or John Cantlie will meet the same fate as James Foley, Steven Sotloff, and David Haines.

Other commentators have argued that ISIS’s use of beheading videos has been designed to bait the West — to draw the U.S. and its allies into another unwinnable war — but the latest video seems to confirm what I have said repeatedly: ISIS wants to consolidate and expand its caliphate since its success in doing that serves as a much potent magnet for recruits than the prospect of being targeted in U.S. airstrikes.

In response to the start of U.S. military operations in Iraq, ISIS seems to have focused most of its efforts beyond America’s current reach by making gains in Syria.

Even though President Obama says he is ready to order airstrikes in Syria, there seems little reason to believe that these are imminent, and ISIS wants to use the intervening period to its full advantage.

The Cantlie video is the second ISIS releases this week.

“Fighting has just begun” declares the “trailer” for its Hollywood-style “Flame of War,” but as it did in its other video release this week, Alhayat Media Center is addressing the public, rather than Western governments, in an effort to increase war fears more than war fever.