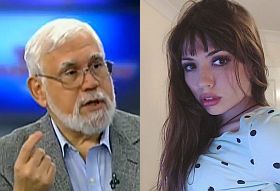 Noah Shachtman and Michael Kennedy write: She thinks that Ebola could be an American military bioweapon. She thinks that the Defense Department’s advanced research arm is covertly intervening in the GamerGate debate about feminism and video games. She’s fond of extremist groups like Hezbollah. She believes the Illuminati are leaving secret clues in, among other places, the viral Kony 2012 video. Oh, and she also says she’s in contact with the Syrian Electronic Army, the hacker group tied to the regime of Syrian dictator Bashar al-Assad.

Meet the Damascus regime’s biggest fangirl on social media — at least in English language social media. Her name is Maram Susli. Or Mimi al-Laham. Or Partisangirl. Or Syrian Girl. Or it would appear, or Syrian Sister. She goes by many handles.

As “Partisangirl,” Susli has emerged from the fever swamps of online conspiracy forums and onto social media to become a darling of truthers and state propaganda channels alike. Whenever there’s unpleasant news about the Syrian military or government, Susli (that’s her surname) seems to be there to interpret the false flag semaphore for her rapt audience. The chemical-weapons attack that killed hundreds in the Damascus suburbs? The rebels’ fault. The massacre of more than 100 men, women, and children in Houla? Oh, that was British intelligence. The U.S. bombing campaign against ISIS in Syria? Just an elaborate show, since American is taking it easy on ISIS. And the ghastly videos featuring the murder of Western aid workers? Many of them are fakes.

“There’s an elite and they’re trying to manipulate people’s minds,” Susli told The Daily Beast. “It’s claimed that we’re living in a free democracy but we’re really not. It’s just an illusion. And the more people know that, the more they distrust what they’re hearing.”

The Internet’s always had a well-populated fringe and Susli’s place in its firmament might not otherwise be noteworthy. But with the help of a distinguished MIT professor — whose work has been cited by a Pulitzer Prize-winning journalist — she’s trying to move beyond the chemtrails crowd. Her YouTube videos have racked up hundreds of thousands of views. She’s been interviewed uncritically by Vice. A lapsed graduate student in chemistry at the University of Western Australia, she’s been brought into the academy to become a source of expertise on the chemical-weapons attack that brought America to the brink of war in Syria last year. [Continue reading…]