Icons are inescapable — even for those who make it their business to destroy them.

For Al Qaeda, Osama bin Laden was an iconic figure. The American effort to hunt him down had more to do with the need to destroy his image than to thwart a terrorist.

So who or what stands as the central symbol, the image around which ISIS gravitates?

In early July, ISIS released a short video showing the stone-faced Abu Bakr al-Baghdadi preaching in a mosque in Mosul. Even if this man happens to be a brilliant military strategist, he possesses no obvious charisma. He looks somewhat less personable than Adolf Hitler and Joseph Stalin. 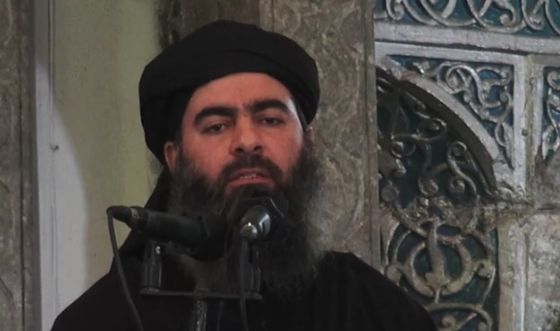 Badhdadi’s brief appearance carried much less significance than the arrival of a new caliph and seemed to have more to do with proving the existence of what was and remains a shadowy figure.

Based on the little he has revealed about himself, his followers have clearly committed themselves through acts of blind allegiance.

The head of ISIS is for all practical purposes invisible.

Moreover, in spite of the fact that ISIS has recruited fighters from dozens of countries, many from the West and many speaking English, from throughout its ranks it appears they have no one competent to serve as a spokesman. Instead they rely on the face and voice of their British hostage, John Cantlie, whose BBC-English offers them credibility they fear they would lack if they dared represent themselves.

ISIS has no face of its own.

Likewise, their media offerings unintentionally pay homage to American cable news and Hollywood, as though there could be no means of communication superior to the crude aesthetic conventions that have been globalized by CNN and Warner Brothers.

On the battlefield, nothing appears to have been a source of greater pride than ISIS’s ability to capture and use American-made military hardware.

ISIS is not American-made in the sense intended by conspiracy theorists, yet in ways its followers would be loath to acknowledge it is in large part an American product — first and foremost as a product of America’s misadventure in Iraq, but also in the multiple ways in which in leans upon American culture.

If there is one image that ISIS has made its own and that serves to symbolize everything ISIS stands for, it is that of grinning men holding aloft freshly severed human heads.

Thanks mostly to Twitter, these are the images we get confronted by with a frequency that would until recently have seemed unimaginable.

Ask anyone in the world about ISIS and the one thing everyone knows is that decapitation is the ISIS signature.

As a symbol of the enemy vanquished, the severed head represents a victory more absolute than unconditional surrender. As such, ISIS presumably engages in these acts of ritual slaughter in order to display its uncompromising, ruthless power.

But the symbolism also cuts another way: the organization with an invisible head and no public face of its own, through decapitation represents its own headlessness.

Furthermore, through its subjugation of women by slavery and rape, ISIS manifests its relationship with the powers of creation: its powers are solely destructive.

What does ISIS ultimately stand for? Death, and little else.