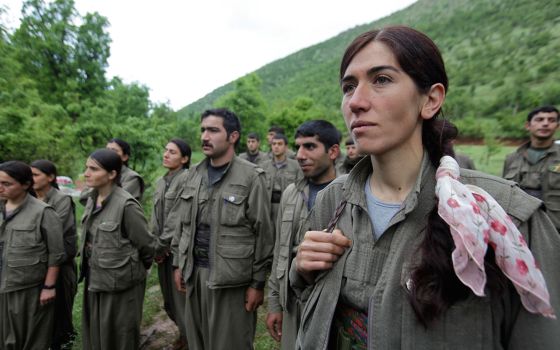 Zîlan Diyar, a Kurdish guerrilla fighter, writes: The whole world is talking about us, Kurdish women. It has become a common phenomenon to come across news about women fighters in magazines, papers, and news outlets. Televisions, news sites, and social media are filled with words of praise. They take photos of these women’s determined, hopeful, and radiant glances. To them, our rooted tradition is a reality that they only recently started to know. They are impressed with everything. The women’s laughter, naturalness, long braids, and the details of their young lives feel like hands extending to those struggling in the waters of despair. There are even some, who are so inspired by the clothes that the women are wearing, that they want to start a new fashion trend! They are amazed by these women, who fight against the men that want to paint the colors of the Middle East black, and wonder where they get their courage from, how they can laugh so sincerely. And I wonder about them. I am surprised at how they noticed us so late, at how they never knew about us. I wonder how they were so late to hear the voices of the many valiant women who expanded the borders of courage, belief, patience, hope, and beauty. I do not want to complain too much. Perhaps our eras just did not match. I just have a few words to say to those who only now begin to notice us, that’s all.

Now one half of us is missing. If there is no past or future in your environment, one feels like a sound, an upsurge that gets lost in the black holes of the universe. The excitement and beauty of today can only be measured by those who were able to carry it to this day and their ability to carry it further to the future. In the cry of Zîlan (Zeynep Kinaci), who detonated herself in 1996 is the breath of Besê, who threw herself off the cliffs in the Dersîm uprising in the 1930s, saying “You cannot catch me alive” and that of Berîtan, who surrendered neither her body, nor her weapon to the enemy, when she threw herself off the mountain cliffs in 1992. It is the reason why YPJ fighter Arîn Mirkan made a mountain wind blow through a desert town, when she detonated herself rather than surrendering to ISIS, in order to cover her retreating comrades in Kobanê this October. In the hearts of the Yezidi women, who take up arms against the men with the black flag is the homesickness of Binevs Agal, a Yezidi woman, who joined the guerilla from Germany in the 1980s and crossed continents to return to her country. In the words of Ayse Efendi, the co-president of the Kobanê people’s assembly, “I will die in my homeland,” is hidden the odin of the rebellious Zarife, who fought in the Dersim uprising. In the smile of the YPJ fighter, who poses with her child while carrying a rifle, is the hope of Meryem Colak, a psychologist, who chose to fight in the mountains and who often shared with us her longing for the daughter she left behind. Deniz Firat, a Firat News journalist, who was killed by ISIS in Makhmur in August, learned to search for truth from Gurbetelli Ersöz, a journalist and guerrilla fighter who died in clashes in 1997. Sema Yüce (Serhildan), who set herself on fire in protest in a Turkish prison in 1992, whispered the secrets of the fire to Leyla Wali Hussein (Viyan Soran), who self-immolated in 2006 to draw attention to the situation of Abdullah Öcalan. Those who today wonder about why the “Girl with the Red Scarf”, a Turkish girl, who was disillusioned from the state after the Gezi-Park protests, would join the mountains, would have known the answer if they had known Ekin Ceren Dogruak (Amara), a Turkish revolutionary woman in the PKK whose grave stone says “The girl of the sea who fell in love with the mountains” and Hüsne Akgül (Mizgin), a Turkish guerrilla fighter of the PKK, who died in 1995. Those surprised at the US Americans, Canadians joining the YPG are those who do not know Andrea Wolf, a German internationalist in the PKK, who was murdered in 1998 and whose bones were thrown into a mass grave, and whose memorial could not be tolerated by the state. [Continue reading…]