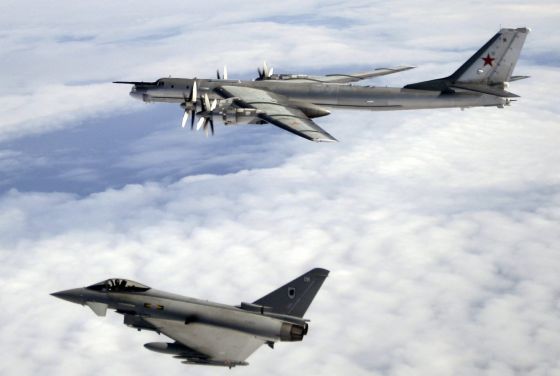 Reuters reports: Britain summoned the Russian ambassador on Thursday and asked him to explain why two Russian “Bear” long-range bombers had flown over the English Channel the previous day, forcing British authorities to reroute civil aircraft.

A British government source told Reuters the incident, which forced Britain to scramble Typhoon interceptor jets, was viewed as “a significant escalation” and marked a change in strategy since Russian aircraft had previously largely confined themselves to flying close to Scotland.

“It was very dangerous. Civil aircraft flying to the UK had to be rerouted,” the source said. “The Russians were flying with their transponders turned off so could only be seen on military radar. They haven’t flown this far south before.”

The Foreign Office said it had summoned Russian Ambassador Alexander Yakovenko to account for the incident, saying the episode was part of an increasing pattern of “out of area operations” by Russian aircraft.

“The Russian planes caused disruption to civil aviation. That is why we summoned the Russian Ambassador today to account for the incident,” it said in a statement.

Last year, NATO conducted more than 100 interceptions of Russian aircraft, about three times as many as in 2013, amid increased tensions between the West and Moscow over the Ukraine crisis. [Continue reading…]

The Guardian reports: Observers said a possible explanation of the timing ofWednesday’s flypast was the start this week of a public inquiry in London into the 2006 killing of a former Russian intelligence officer, Alexander Litvinenko, by radioactive poisoning.

The UK has charged two former KGB agents with the murder. A lawyer for Litvinenko’s widow has claimed in court that the assassination was ordered by Vladimir Putin.

“This may be timed with the Litvinenko court case as a signal of displeasure,” Ian Kearns, the director of the European Leadership Network, and an associate fellow at the Royal United Services Institute, said. “But it fits with a wider posture of a more assertive Russian demonstration of a growing capability to defend and assert its interests as it sees fit.”