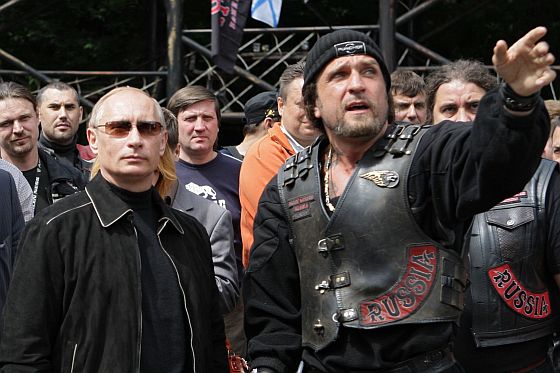 The New York Times reports: Several hundred leather-clad motorcyclists from the Night Wolves, a club closely allied with President Vladimir V. Putin of Russia, plan to roar from Moscow to Berlin this month for the 70th anniversary of the Soviets’ victory over Nazi Germany.

Like the Red Army before them, the Night Wolves will have several countries to cross on the way, including Poland. And given the current tensions over Ukraine and widespread worries that Mr. Putin may have other aggressive designs on his neighbors, the prospect of hundreds of Russian bikers’ roaring across the Polish countryside — not to mention Slovakia, the Czech Republic, Austria or Germany — is not being greeted with joy in all quarters.

“I wish they would never come here,” said Monika Trzcinska, the mayor of Braniewo, a small Polish town a stone’s throw from the Russian border, which will be the first stop in Poland for some of the riders on April 25.

A Facebook page opposing the event had 11,000 likes by Wednesday afternoon with a logo featuring a Polish eagle with a lit match chasing a flaming wolf. Meanwhile, a petition calling for the motorcycle rally to be banned had attracted 4,000 signatures, and some Polish lawmakers were calling on their government to find some way to block the event.

Prime Minister Ewa Kopacz called the rally a “provocation” in an interview Tuesday on Polish radio, and said it would be up to Polish border guards to decide whether Russian bikers would be allowed into the country.

Some Polish biker groups said they intended to take to the highways to block the Russians, but others were more welcoming. [Continue reading…]