How many mass movements in search of political rights would have been pronounced failures if success had to be established in just five years?

The quest for women’s rights has continued throughout human history and continues today.

Palestinians, Kurds, Tibetans, Kashmiris, and numerous other groups of indigenous peoples have for many decades campaigned and fought for their rights, often with very limited success.

But when it comes to the Arab Spring, those who stand to lose most from the expansion of political rights across the region, are now — not surprisingly — only too eager to pronounce it an expensive failure.

The idea that it might have been better to stay home and stay quiet, will all too easily resonate among the millions of people who have suffered the effects of the suppression of the Arab Spring.

As some of the region’s autocratic rulers and their advisers gathered in Dubai this week and soberly measured the “cost of the Arab Spring,” they should also — had they been honest — have been celebrating the rise of ISIS.

From Dubai to Tehran and from Riyadh to Cairo, it has been ISIS that has saved the day. The Arab Strategy Forum should have invited Abu Bakr al-Baghdadi as their guest of honor.

Don’t get me wrong. I’m not promoting any of the conspiracy theories about ISIS being the creation of a foreign government (be that the Saudis, the Turks, the Israelis, or the Americans — which of those being the culprit would depend merely on who the proponent such a theory sees as the worst enemy).

ISIS saved the day through its savagery by convincing nearly everyone else that political stability is worth more than any kind of political freedom.

Much as it will often be repeated that the need to destroy ISIS has never been more urgent, those whose rule is currently being legitimized by ISIS’s existence will be quite content for this war to be a valiant fight that sees no end.

And those blinkered by the conviction that the U.S. government is the architect of all the world’s afflictions, need to recognize that conflict in the Middle East is now being driven from many engine rooms — in Damascus, Moscow, Tehran, Jerusalem, Ankara, Riyadh, Cairo, Abu Dhabi, Doha, Beirut, Raqqa and elsewhere — in pursuit of incompatible agendas. 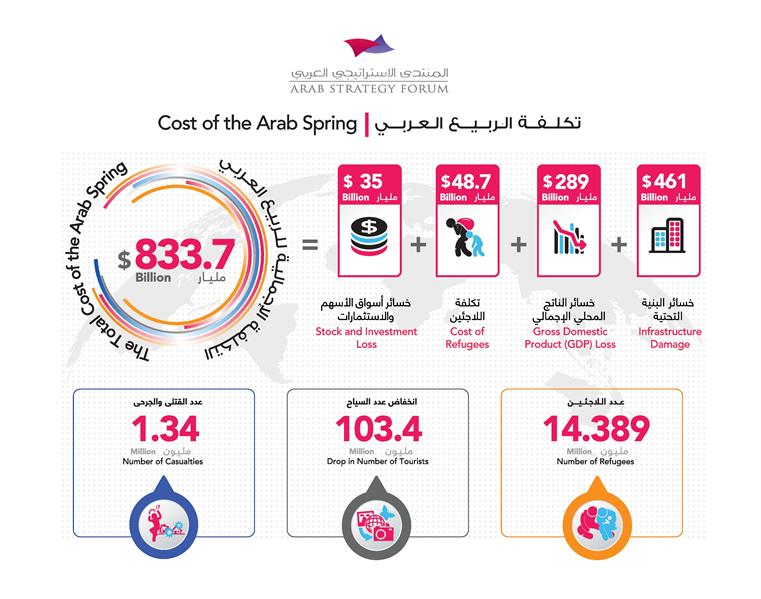 Among those costs, the greatest are not measured in dollars — the numbers of casualties and refugees. And these are not costs of the Arab Spring; they are, above all, the cost of the Assad regime’s refusal to respect the rights of the Syrian people.