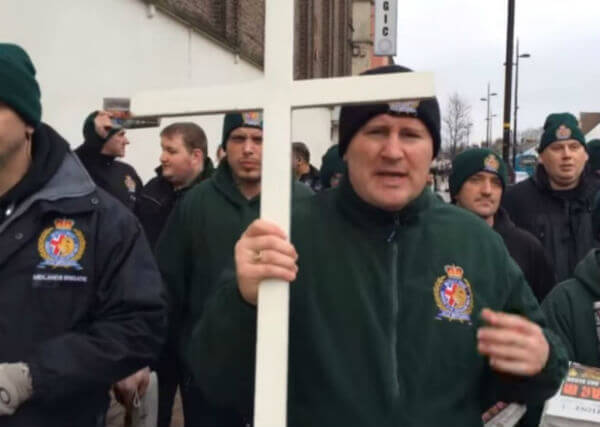 The Washington Post reports: It’s a video that depicts just the sort of civilizational clash that extremists everywhere crave: Christians walking down a central shopping street in Britain. Muslim storekeepers and passerby hurling verbal abuse. A push. More abuse from both sides. And finally, police intervening to keep the warring clans apart.

The video, a slick propaganda job by the virulently anti-Muslim group Britain First, became a viral hit when the organization posted it to its Facebook page, racking up millions of views.

But there was more to the story than what the video showed.

The video was filmed on Jan. 23 in the multicultural British town of Luton, 30 miles north of London. The town, a former industrial powerhouse that is today known for its budget-flight-focused airport, has become a magnet for both Islamist and Islamophobic extremists. It’s often the canvas upon which hate groups unfurl their provocative displays.

And so it was when Britain First came to town for the fourth time in two years for what it termed a “Christian Patrol.”

The group — a far-right rival of the homegrown English Defense League — specializes in anti-Muslim street theater, while dressing itself in the garb of a devoutly Christian organization. Members wear dark green paramilitary-style uniforms, and march with oversized crosses through Muslim-majority areas, or even through mosques. [Continue reading…]

Would the Washington Post refer to the Ku Klux Klan as bearing the symbols of a devoutly Christian organization because — like Britain First — its members like to march carrying large crosses?

There’s no question that these knuckleheads and self-described defenders of British culture have as little right to speak in the name of Christianity as Anjem Choudary has to present himself as the voice of Islam. But easy as Paul Golding and his rowdy followers might be to dismiss, do they actually stand at the vanguard of a much wider but less visible movement stretching across Britain?

The Washington Post picked up this story because Britain First’s recent Luton video went viral, but how much political significance derives from social media popularity?

Britain’s Labour Party, now under the leadership of Jeremy Corbyn who enjoys more grass root support than he does in parliament, has a Facebook page with 422,000 likes.

But what do all these “likes” actually mean?

Paul Golding probably thinks they mean a lot and this might explain why he felt confident enough to run in the upcoming election to become Mayor of London. Moreover, he probably thinks it’s imperative that he, or someone like him, be able to govern the British capital city given that his leading opponent, Sadiq Khan, is a Muslim.

The election will take place on May 5, and the most recent YouGov poll gives Khan a clear lead (45%) over his closest rival, Zac Goldsmith (35%).

That is to say, 1% of London voters say they support the BNP while 0% support Britain First.

Maybe the antics of Golding and his motley crew deserve less attention than does the promise of what would surely be a victory for multiculturalism: the increasingly likely election of London’s first Muslim mayor.

1 thought on “How popular are Britain First and its Islamophobic ‘Christian patrols’?”