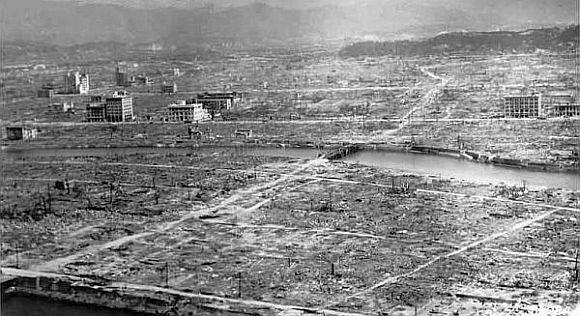 Whenever questions are raised about the moral justification for destroying Hiroshima and Nagasaki with atomic bombs in 1945, it’s generally assumed that President Truman’s decision to use these weapons was instrumental in ending World War II.

Given the staggering loss of life the war had already brought by that time, it’s hard to avoid imagining that almost any means possible — including the use of nuclear weapons — might have been justifiable if this would result in hastening the end of the war.

Hiroshima was bombed on August 6, 1945. Japan’s surrender was announced by Emperor Hirohito on August 15. For this reason, many Americans think that apologizing for the destruction of these two Japanese cities would make no more sense than wishing that the war had dragged on for longer with even more lives lost.

But in Five Myths about Nuclear Weapons published in 2013, Ward Wilson argues that it was Stalin’s decision to invade Japan — not the use of the bomb — that led to the Japanese surrender.

Wilson points out that while the nuclear attacks on Hiroshima and Nagasaki are typically viewed as extraordinary in the level of destruction they caused, during the U.S. air campaign at that time there was less reason than we imagine to draw a sharp distinction between conventional and nuclear bombing.

In the summer of 1945, the U.S. Army Air Force carried out one of the most intense campaigns of city destruction in the history of the world. Sixty-eight cities in Japan were attacked and all of them were either partially or completely destroyed. An estimated 1.7 million people were made homeless, 300,000 were killed, and 750,000 were wounded. Sixty-six of these raids were carried out with conventional bombs, two with atomic bombs. The destruction caused by conventional attacks was huge. Night after night, all summer long, cities would go up in smoke. In the midst of this cascade of destruction, it would not be surprising if this or that individual attack failed to make much of an impression — even if it was carried out with a remarkable new type of weapon.

The Japanese were in a relatively difficult strategic situation. They were nearing the end of a war they were losing. Conditions were bad. The Army, however, was still strong and well-supplied. Nearly 4 million men were under arms and 1.2 million of those were guarding Japan’s home islands.

Even the most hardline leaders in Japan’s government knew that the war could not go on. The question was not whether to continue, but how to bring the war to a close under the best terms possible. The Allies (the United States, Great Britain, and others — the Soviet Union, remember, was still neutral) were demanding “unconditional surrender.” Japan’s leaders hoped that they might be able to figure out a way to avoid war crimes trials, keep their form of government, and keep some of the territories they’d conquered: Korea, Vietnam, Burma, parts of Malaysia and Indonesia, a large portion of eastern China, and numerous islands in the Pacific.

They had two plans for getting better surrender terms; they had, in other words, two strategic options. The first was diplomatic. Japan had signed a five-year neutrality pact with the Soviets in April of 1941, which would expire in 1946. A group consisting mostly of civilian leaders and led by Foreign Minister Togo Shigenori hoped that Stalin might be convinced to mediate a settlement between the United States and its allies on the one hand, and Japan on the other. Even though this plan was a long shot, it reflected sound strategic thinking. After all, it would be in the Soviet Union’s interest to make sure that the terms of the settlement were not too favorable to the United States: any increase in U.S. influence and power in Asia would mean a decrease in Russian power and influence.

The second plan was military, and most of its proponents, led by the Army Minister Anami Korechika, were military men. They hoped to use Imperial Army ground troops to inflict high casualties on U.S. forces when they invaded. If they succeeded, they felt, they might be able to get the United States to offer better terms. This strategy was also a long shot. The United States seemed deeply committed to unconditional surrender. But since there was, in fact, concern in U.S. military circles that the casualties in an invasion would be prohibitive, the Japanese high command’s strategy was not entirely off the mark.

One way to gauge whether it was the bombing of Hiroshima or the invasion and declaration of war by the Soviet Union that caused Japan’s surrender is to compare the way in which these two events affected the strategic situation. After Hiroshima was bombed on August 8, both options were still alive. It would still have been possible to ask Stalin to mediate (and Takagi’s diary entries from August 8 show that at least some of Japan’s leaders were still thinking about the effort to get Stalin involved). It would also still have been possible to try to fight one last decisive battle and inflict heavy casualties. The destruction of Hiroshima had done nothing to reduce the preparedness of the troops dug in on the beaches of Japan’s home islands. There was now one fewer city behind them, but they were still dug in, they still had ammunition, and their military strength had not been diminished in any important way. Bombing Hiroshima did not foreclose either of Japan’s strategic options.

The impact of the Soviet declaration of war and invasion of Manchuria and Sakhalin Island was quite different, however. Once the Soviet Union had declared war, Stalin could no longer act as a mediator — he was now a belligerent. So the diplomatic option was wiped out by the Soviet move. The effect on the military situation was equally dramatic. Most of Japan’s best troops had been shifted to the southern part of the home islands. Japan’s military had correctly guessed that the likely first target of an American invasion would be the southernmost island of Kyushu. The once proud Kwangtung army in Manchuria, for example, was a shell of its former self because its best units had been shifted away to defend Japan itself. When the Russians invaded Manchuria, they sliced through what had once been an elite army and many Russian units only stopped when they ran out of gas. The Soviet 16th Army — 100,000 strong — launched an invasion of the southern half of Sakhalin Island. Their orders were to mop up Japanese resistance there, and then — within 10 to 14 days — be prepared to invade Hokkaido, the northernmost of Japan’s home islands. The Japanese force tasked with defending Hokkaido, the 5th Area Army, was under strength at two divisions and two brigades, and was in fortified positions on the east side of the island. The Soviet plan of attack called for an invasion of Hokkaido from the west.

It didn’t take a military genius to see that, while it might be possible to fight a decisive battle against one great power invading from one direction, it would not be possible to fight off two great powers attacking from two different directions. The Soviet invasion invalidated the military’s decisive battle strategy, just as it invalidated the diplomatic strategy. At a single stroke, all of Japan’s options evaporated. The Soviet invasion was strategically decisive — it foreclosed both of Japan’s options — while the bombing of Hiroshima (which foreclosed neither) was not.

In this case, even if the nuclear attacks hastened the end of the war, it may have only been by a matter of a few days or weeks. The assumption that some greater good had been served is much harder to sustain.

At the same time, having already chosen to use these weapons twice and chosen to use them to wipe out civilian populations, the United States was thereafter in a much harder position to assert moral authority in saying that nuclear weapons must never be used again.

When Barack Obama visits Hiroshima later this month, he will make no apology for the destruction of this city. He will again call for global nuclear disarmament, but his appeal won’t carry much weight, given his decision to spend $348 billion on upgrading the U.S. nuclear arsenal over the next decade.

To many observers, Obama’s nuclear aspirations do more than highlight his nuclear hypocrisy:

That declaration rings hollow to critics who believe Obama’s plan to overhaul and upgrade the U.S. nuclear arsenal is sparking a dangerous new arms race with China and Russia. The modernization program, including purchases of new bombers and ballistic missile submarines, could cost as much as $1 trillion over the next 30 years, said Lisbeth Gronlund, co-director of the Union of Concerned Scientists’ Global Security Program.

“The plan to rebuild and refurbish every weapon that we have basically sort of throws the gauntlet down, and Russia and China feel like they have to match it,” Gronlund said in an interview. “He has said really great things but his actions have not really been consistent with his words.”

As the Daily Beast reports, the “post-Cold War nuclear holiday is over” — a new nuclear arms race has already begun.