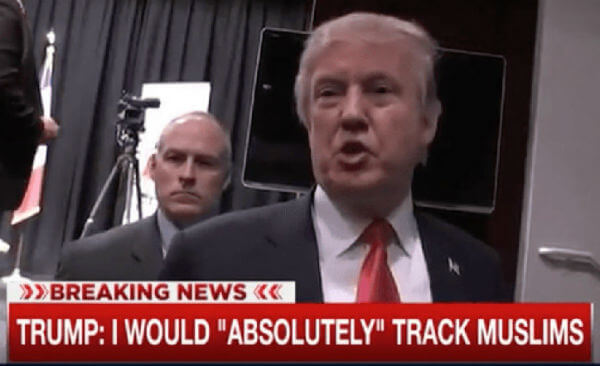 Trump has relentlessly fueled Islamophobia and insisted that the key to combating terrorism is to label it Islamic.

Trump chose as his closest national security adviser, Michael Flynn, who has described Islam as a cancer.

Trump just signed an executive order that singles out 200,000 Muslims as a potential threat to America.

Shortly after Trump signed this order, Alexandre Bissonnette, a vocal Trump supporter, known for his online attacks on refugees, went to a Quebec City mosque and carried out a mass shooting, killing six people and injuring 19 others.

As The Globe and Mail reports:

The suspect in the deadly attack on a Quebec City mosque was known in the city’s activist circles as an online troll who was inspired by extreme right-wing French nationalists, stood up for U.S. President Donald Trump and was against immigration to Quebec – especially by Muslims.

To fail to draw a connection between Trump’s campaign rhetoric, his choice of advisers, his executive order targeting Muslims and Bissonnette’s murderous rampage would be absurd.

In the hostile climate Trump has helped cultivate, there have been anti-mosque incidents in at least 41 states.

Within hours of Trump signing the executive order a mosque in Texas went up in flames.

The massacre in Canada could just as easily have happened in the United States. Indeed, the risk of a similar attack is so great that it seems less a case of if than when.

Donald Trump has promised to make America safe and yet through his words and actions has already done enough to suggest that the stable of Trump brands will sooner or later acquire one that he will vociferously disavow as a slur on his name: Trump terrorism.

That is not to suggest that Trump actually wants anyone to engage in acts of terrorism.

At the same time and for the same reasons as Alex Massie spelled out after Jo Cox’s murder in Britain last June, those who fuel anger cannot absolves themselves of responsibility for what follows:

When you encourage rage you cannot then feign surprise when people become enraged. You cannot turn around and say, ‘Mate, you weren’t supposed to take it so seriously. It’s just a game, just a ploy, a strategy for winning votes.’

When you shout BREAKING POINT over and over again, you don’t get to be surprised when someone breaks. When you present politics as a matter of life and death, as a question of national survival, don’t be surprised if someone takes you at your word. You didn’t make them do it, no, but you didn’t do much to stop it either.

Trump’s biggest lie is to promote the myth that the greatest threats to American lives reside outside this country’s borders.

Right now the very opposite is true as the most incendiary catalyst of violence sits in the Oval Office.