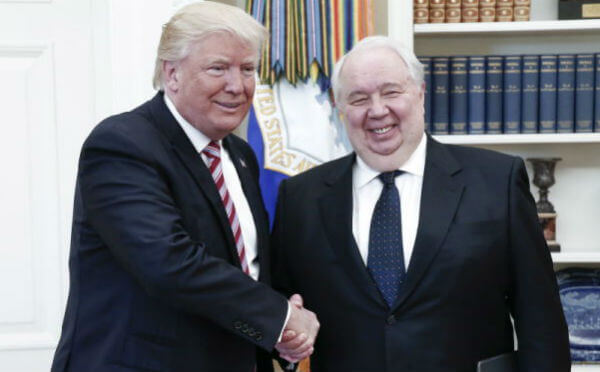 The Daily Beast reports: Senior members of the Trump administration are livid that the White House allowed the Russian government to steer the narrative of the president’s Wednesday meeting with top Russian diplomats by giving Kremlin-backed media exclusive access to the event.

The White House did not allow American press into the meeting between President Donald Trump, Russian foreign Minister Sergey Lavrov, and Russia’s ambassador to Washington, Sergey Kislyak. But it did admit a photographer from TASS, a state-owned Russian news service. Its photos were subsequently posted on TASS’s website, giving that outlet a monopoly on publishable visuals of the meeting.

Russian government Twitter accounts shared photos of the event shortly after its conclusion. They revealed Kislyak’s presence—a fact that was not even mentioned in the official White House readout of the meeting. Some U.S. officials suspect Kislyak, whose conversations with Trump’s former National Security Adviser have fed an FBI investigation of his campaign, is a Kremlin spy—or at least spy-adjacent.

Two senior administration officials, one an Obama holdover and the other a Trump appointee, told The Daily Beast that the resulting reliance of U.S. media on a propaganda arm of a foreign government let Russia set the public tone of the meeting and embarrassed the administration amid already contentious discussions with Russian diplomats.

Both officials spoke on condition of anonymity in order to candidly express their views. The White House did not immediately respond to a request for comment.

“This isn’t an ‘America First’ policy,” one of the officials fumed of the White House’s decision “to let the biggest perpetrator of fake news into the Oval Office.” Trump, the official added, is “either in bed with the Russians or too stupid to understand the severity of this mistake. Either way, the implications are truly terrifying.” [Continue reading…]