US officials had evidence of widespread torture by Indian police and security forces and were secretly briefed by Red Cross staff about the systematic abuse of detainees in Kashmir, according to leaked diplomatic cables released tonight.

The dispatches, obtained by website WikiLeaks, reveal that US diplomats in Delhi were briefed in 2005 by the International Committee of the Red Cross (ICRC) about the use of electrocution, beatings and sexual humiliation against hundreds of detainees.

Other cables show that as recently as 2007 American diplomats were concerned about widespread human rights abuses by Indian security forces, who they said relied on torture for confessions.

The revelations will be intensely embarrassing for Delhi, which takes pride in its status as the world’s biggest democracy, and come at a time of heightened sensitivity in Kashmir after renewed protests and violence this year. 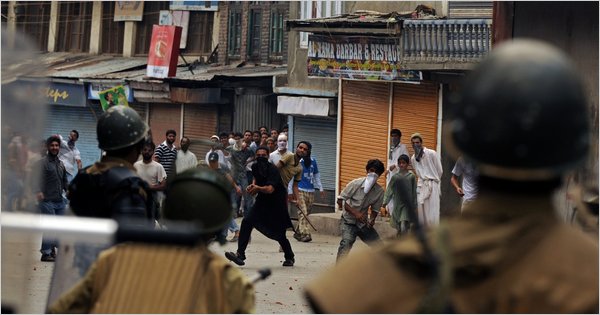 Once known for its extraordinary beauty, the valley of Kashmir now hosts the biggest, bloodiest and also the most obscure military occupation in the world. With more than 80,000 people dead in an anti-India insurgency backed by Pakistan, the killings fields of Kashmir dwarf those of Palestine and Tibet. In addition to the everyday regime of arbitrary arrests, curfews, raids, and checkpoints enforced by nearly 700,000 Indian soldiers, the valley’s 4 million Muslims are exposed to extra-judicial execution, rape and torture, with such barbaric variations as live electric wires inserted into penises.

Why then does the immense human suffering of Kashmir occupy such an imperceptible place in our moral imagination? After all, the Kashmiris demanding release from the degradations of military rule couldn’t be louder and clearer. India has contained the insurgency provoked in 1989 by its rigged elections and massacres of protestors. The hundreds of thousands of demonstrators that fill the streets of Kashmir’s cities today are overwhelmingly young, many in their teens, and armed with nothing more lethal than stones. Yet the Indian state seems determined to strangle their voices as it did of the old one. Already this summer, soldiers have shot dead more than 50 protestors, most of them teenagers.

The New York Times this week described the protests as a comprehensive “intifada-like popular revolt“. They indeed have a broader mass base than the Green Movement does in Iran. But no colour-coded revolution is heralded in Kashmir by western commentators. The BBC and CNN don’t endlessly loop clips of little children being shot in the head by Indian soldiers. Bloggers and tweeters in the west fail to keep a virtual vigil by the side of the dead and the wounded. No sooner than his office issued it last week, the UN secretary general, Ban Ki-moon, hastened to retract a feeble statement expressing concern over the situation in Kashmir.