The People vs. the Profiteers
By David Rose, Vanity Fair, November, 2007

In his functional home-office in Orlando, and at the Beltway headquarters of his law firm, Grayson & Kubli, [Alan] Grayson spends most of his days and many of his evenings on a lonely legal campaign to redress colossal frauds against American taxpayers by private contractors operating in Iraq. He calls it “the crime of the century.” 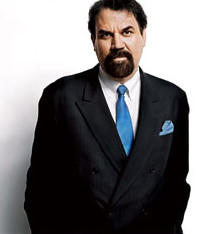 His obvious adversaries are the contracting corporations themselves—especially Halliburton, the giant oil-services conglomerate where Vice President Dick Cheney spent the latter half of the 1990s as C.E.O., and its former subsidiary Kellogg, Brown & Root, now known simply as KBR. But he says his efforts to take on those organizations have earned him another enemy: the United States Department of Justice.

Over the past 16 years, Grayson has litigated dozens of cases of contractor fraud. In many of these, he has found the Justice Department to be an ally in exposing wrongdoing. But in cases that involve the Iraq war, the D.O.J. has taken extraordinary steps to stand in his way. Behind its machinations, he believes, is a scandal of epic proportions—one that may come to haunt the legacy of the Bush administration long after it is gone. [complete article]