If Iran is, as Netanyahu and his allies in the U.S. suggest, irrationally aggressive, prone to a suicidal desire for apocalyptic confrontation, then both diplomacy and deterrence and containment are ruled out as policy options for Washington. The “Mad Mullahs,” as the neocons call them, are not capable of traditional balance of power realism. In the arguments of Netanyahu and such fellow travelers as Norman Podhortez and Newt Gingrich, to imagine that war against the regime in Tehran is avoidable is to be as naïve as Chamberlain was in 1938. 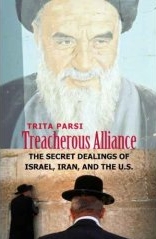 However, as I discovered in the course of researching my book Treacherous Alliance – the Secret Dealings of Israel, Iran and the United States, not only does Netanyahu’s characterization of Iran have little relationship to reality; Netanyahu himself knows this better than most. Outside of the realm of cynical posturing by politicians, most Israeli strategists recognize that Iran represents a strategic challenge to the favorable balance of power enjoyed by Israel and the U.S. in the Middle East over the past 15 years, but it is no existential threat to the Israel, the U.S. or the Arab regimes.

And that was the view embraced by the Likud leader himself during his last term as prime minister of Israel. In the course of dozens of interviews with key players in the Israeli strategic establishment, a fascinating picture emerged of Netanyahu strongly pushing back against the orthodoxy of his Labor Party predecessors, Yitzhak Rabin and Shimon Peres, which treated Iran as one of Israel’s primary enemies. Not only that, he initiated an extensive discreet program of reaching out to the Islamic Republic. [complete article]

Editor’s Comment — Without wanting to understate Israel’s capacity for irrational behavior, it’s worth asking whether for the Israeli right there is one issue to which all others are subordinate. I would say that there is and that it is the consolidation of the territorial expansion that Israel has been engaged in for the last 40 years through building settlements in the West Bank. Even today, The Guardian reports on yet more seizure of Palestinian land that will allow a huge expansion of settlements. The greatest threat to this ongoing expansionist enterprise would come from the revival of the long-stalled peace process. The relentless construction of settlements, the construction of an apartheid road system separating Israeli and Palestinian traffic, and the construction of the so-called security barrier — these are all ways of making it clear, declarations to the contrary notwithstanding, that Israel has no intention of withdrawing to the 1967 borders.

And how does Iran fit into this equation? It presents a useful diversion through which in the shadow of a supposed existential threat, the development of the West Bank can continue all the way to the end of a window of opportunity — otherwise known as the Bush administration.

While Netanyahu’s neoconservative supporters in Washington can’t wait to see the bombs rain down on Iran, my suspicion (and it’s nothing more than that) is that Bibi will play the 1938 rhetoric for all it’s worth even while the prospect of a nuclear-armed Iran doesn’t cause him to loose a wink of sleep. Indeed, a silver-lining for Israel from a nuclear Iran is that that would provide the Jewish state with the perfect opportunity to come out of its own nuclear closet. It could claim that it was remaining true to its assertion that it would not have been the first state to “introduce” nuclear weapons to the region even if it was the first to deploy them — it simply didn’t make a fanfair about the fact; there was no declaration, no introduction. And with the balance of power having shifted towards Iran, the Israel lobby in Washington would have an easy time sustaining the United States’ financial commitment to Israel’s defense into perpetuity.

Having said that, a line that’s almost as popular as Netanyahu’s “1938”, is John McCain’s, “There is only one thing worse than the United States exercising a military option, that is a nuclear armed Iran.” The question thus remains, does the US and/or Israel truly believe that in such an attack the benefits outweigh the risks?

If Israel’s recent incursion into Syrian airspace was really as momentous an event as all the neocon chest-thumping would suggest, how come we still don’t know what happened? What might have been seen as a muscle-flexing exercise directed at Iran, at this point looks more like a very cautious dip of one toe in some icy water. While its success as a PR exercise is beyond question, its military significance remains in doubt.

And while the Iran-baiting rhetoric coming from American officials in Iraq has been escalating for months and months, it remains possible that the threshold will never be crossed from words to war. Everyone is playing an extremely dangerous game, yet the contest between those competing for the title, “master of destiny,” is a struggle between men, not one of whom has a clear view of the future.