Al-Jazeera: Strike on Syria was made by U.S. Air Force with tactical nukes
Israel Insider, November 2, 2007

The September 6 raid over Syria was in fact carried out by the US Air Force, Al-Jazeera’s Web site reported in Arabic Friday, quoting unnamed Israeli and Arab sources as saying that two strategic US jets armed with tactical nuclear weapons executed the attack on a nuclear site under construction.

The sources were quoted as saying that Israeli F-15 and F-16 jets only provided cover for the US fighter-bombers, which carried one tactical nuclear weapon apiece. The site was hit by one bomb and totally destroyed. The use of nukes might account for the fact that the suspected plant was effectively erased from the earth, with few if any traces remaining, according to satellite photos. [complete article]

In addition to the military objective of destroying the target, the raid on Syria also had important international and domestic political overtones, notes one Israeli official. The goal was to send a strategic signal to the region about Israel’s willingness to act. Moreover, for the IAF, the mission was an important step. The armed forces are grappling with lessons learned from last year’s Lebanon war and a potential budget shift to the ground forces. As a result, the air arm wanted to signal its continued importance to national defense. [complete article]

Editor’s Comment — Former CIA officer Philip Giraldi, recently asserted that the Box-on-the-Euphrates story bears all the marks of a “classic disinformation” campaign. I beg to differ. I think the script here comes straight out of The Onion. How else can we account for such a wildly meandering narrative that spans every quarter from historic event — the first offensive use of nuclear weapons since “Fat Man” obliterated Nagasaki on August 9, 1945 — to the prosaic — a theatrical piece of budgetary infighting as the Israeli Air Force competes against the Israeli Army for a larger slice of the IDF sheqel pie — to the absurd — a Syrian super secret, so secret it couldn’t be revealed to Syria’s own military?

What next? It was Osama bin Laden’s hide out and he got killed in the attack?

And just in case anyone wants to think seriously about the idea that a tactical nuclear weapon was used to destroy the Box on the Euphrates (or “tall building shaped like a square” to use the IAEA’s more technically precise nomenclature), this is what an explosion equivalent to a low-yield (5kt) nuclear explosion looks like: 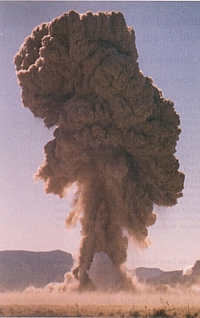 This is what happens to a house located 1,100 meters away a somewhat larger (16kt) explosion:

And this is a picture of the Syrian site after the attack:

Note, a small building just 300 meters directly up from “ground zero” was still standing after the attack. That’s a clue — there was no nuclear shockwave that ripped through this gully.