The intelligence officer I met in Dera Ismail Khan, whose area of operations included the Taliban-ruled enclave of South Waziristan, maintains that his contacts with the militants were severed long ago. “We can hardly work there anymore,” he told me. “The Taliban suspect everyone of spying. All of our sources have been slaughtered.” 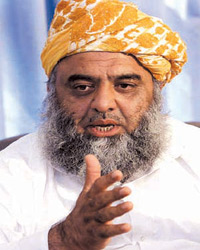 I asked [Jamiat Ulema-e-Islam chief, Maulana Fazlur] Rehman, who used to refer to the Taliban as “our boys,” if he still considered the Taliban, even those who might be firing rockets at his house, his boys. “Definitely,” he replied. “But because of America’s policies, they have gone to the extreme. I am trying to bring them back into the mainstream. We don’t disagree with the mujahedeen’s cause, but we differ over priorities. They prefer to fight, but I believe in politics.”

Mushahid Hussain, secretary general of the pro-Musharraf faction of the Pakistan Muslim League, told me that no one can negotiate the politics of the North-West Frontier Province better than Rehman. “We know that we need a bearded, turbaned guy out there,” Hussain told me. It is perhaps a measure of how inextricable Islamism and politics have become in Pakistan that even the United States would deal with an anti-American like Rehman. In September, he had the first meeting of his 30-year political career with an American ambassador. What did Rehman and Anne Patterson, the American envoy, discuss? “She urged me to form an electoral alliance with Benazir Bhutto and Musharraf,” he told me a few days after the meeting. “I am not against it. But politically, because of the American presence in Afghanistan and rising extremism, it is a bit hard for us to afford.” Plus, the fact that the Americans thought Bhutto could tackle the Taliban had simply baffled him. “She has no strategy in those areas, and nothing to do with those people,” he said.

When asked if Patterson’s meeting signaled a change in American attitudes, an embassy spokeswoman said it “reflects our approach to democratic politics in Pakistan” and was “part of a process of talking to all those who represent political movements in Pakistan, across the spectrum.” The U.S. has given more than $5 billion to Pakistan in the past few years to fight Islamist militants, but recent reports suggest that the aid has not been effective. Late last month, Congress put restrictions on some military aid and called for the restoration of democratic rights. [complete article]

Two years before Benazir Bhutto was assassinated while leading her Pakistan People’s Party in its campaign against the rule of President Pervez Musharraf, the Bush administration devoted this much new aid money to strengthen political parties in Pakistan: $0.

The entire U.S. budget for democracy programs in Pakistan in 2006 amounted to about $22 million, according to State Department documents, much of it reserved for aiding the Election Commission — an entity largely controlled by Musharraf. That $22 million was just a small fraction of the $1.6 billion in aid the United States gave Pakistan that year, and it was equivalent to the value of jet engine and helicopter spare parts that Pakistan purchased in 2006 with the help of U.S. funds.

In the past year, as Musharraf’s grip on power became increasingly fragile, the Bush administration has scrambled to build contacts with the opposition and to provide expertise to opposition parties. The money devoted to democracy programs in the 165 million-person country was almost doubled in the fiscal 2008 budget, to $41 million, but that is still less than the $43 million set aside for such efforts in Kosovo, the former Albanian enclave of Serbia with a population of 2 million. In the region, U.S. democracy programs aimed at Afghanistan, Iraq, Iran and Egypt are all larger than the effort in Pakistan. [complete article]

At the heart of Pakistan, life keeps a normal beat
By Jason Burke, The Observer, January 6, 2008

The presence of a Western journalist provokes rowdy debates. The collective answer to the question ‘Is the West anti-Islamic?’ is that governments are, but people are not. Razzaq, the teashop owner, answers the question of whether the dozen or so men there feel themselves to be Pakistani, Sindhi or Muslim. ‘We are Muslim and then Pakistani,’ he says to general approbation. The television, momentarily ignored, is tuned to a satellite TV station broadcasting in the local Sindhi, not Urdu, the national language.

Faith and politics are intertwined with local identity, too. Radical Islam that probably led to the killing of Bhutto is seen as foreign here, where the folksy, pluralistic Barelvi strand of the faith is dominant.

‘We are not extreme,’ said Maja Ali, Old Jatoi’s storekeeper. ‘We are Sindhis. We are secular and democratic people. We are not sectarian. We are not like people in other parts of Pakistan.’ The regional pride is sometimes hidden, but always there in the background. When one of the rare local supporters of Benazir Bhutto blames ‘the Punjab’ for her death, he is at the same time accusing the army, dominated by Pakistanis originating in the eastern province, and expressing a long-standing resentment against the politically and economically dominant north.

But the political debate does not last long. The villagers return to topics of more interest: the cricket, inflation and the interesting stories about the barber’s wife who, everyone agrees, is as beautiful as the heroine of a Bollywood movie, the highest possible praise. [complete article]

Editor’s Comment — It’s not that the United States needs to be spending more on “democracy promotion” in Pakistan or anywhere else. Such efforts can rightly be regarded as intrusive. The need is simply to spend less on butressing governments that suppress the rights of their own people to self-determination. The will of the people has to be expressed — guess what? — by the people.