The Israeli Prime Minister, Ehud Olmert, declared last night that Israel reserved the right to expand existing Jewish settlements in Arab East Jerusalem and in parts of the West Bank that it hopes to retain in any final peace deal. 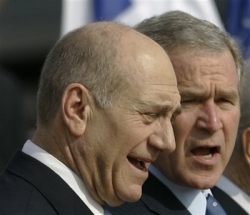 In terms which appeared to defy earlier sharp criticism by the US Secretary of State, Condoleezza Rice, Mr Olmert made it clear in front of President George Bush that he regarded such expansion as outside the “moratorium” he has promised on new settlement building. His declaration came as the US President, on his first visit in office to Israel, used some of his strongest language yet in demanding the dismantling of separate settlement outposts which are illegal even under Israeli law. Mr Bush said at a joint news conference last night: “We have been talking about it for four years – illegal outposts. They ought to go.”

Mr Olmert did not demur from that and repeatedly emphasised that Israel was very serious about advancing a negotiating process over the coming year. Mr Bush said the resumption of formal negotiations between Mr Olmert and the Palestinian President, Mahmoud Abbas, presented a historic moment, a historic opportunity. [complete article]

“You’ll be happy to know, my whole motorcade of a mere 45 cars was able to make it through without being stopped,” Bush said after being asked about the 30-minute journey from Jerusalem and Ramallah.

“I’m not so exactly sure that’s what happens to the average person.”

Bush was forced to travel by car to meet Mahmoud Abbas, the Palestinian president, in the West Bank after his helicopter was grounded by bad weather.

The journey took him through an Israeli security checkpoint and within sight of the separation barrier.

Bush said that he could understand why Palestinians were “frustrated” by the checkpoints, but they were necessary to “create a sense of security for Israel”. [complete article]

Editor’s Comment — If Americans had to live under the same kind of stranglehold as do Palestinians in the West Bank, there would be more than 800,000 roadblocks across this country. To speak of “frustration” wouldn’t even hint at the level of anger ordinary people would feel at this extraordinary curtailment of freedom.

For Bush to joke about not getting stopped at an Israeli checkpoint shows a staggering degree of insensitivity — though it will hardly surprise or shock the average Palestinian.

Angry demonstrators in the West Bank town of Ramallah branded US President George W. Bush a “war criminal” on Thursday as locals said he would do nothing for the plight of the Palestinians.

Security forces, out in force to ensure the security of the American leader on his first trip to the occupied Palestinian territory, used batons and tear gas as they charged around 200 demonstrators who were chanting “Bush, war criminal!” and “Bush out!”.

While their leader Mahmud Abbas gave Bush a red carpet welcome on the second day of his Middle East tour, ordinary Palestinians were dismisssive. [complete article]

President Bush today predicted that a Mideast peace treaty would be completed by the time he leaves office, but undercut that optimism with harsh criticism of Hamas militants who control part of the land that could form an eventual independent Palestine.

Bush said he’s convinced that both Israeli and Palestinian leaders understand “the importance of democratic states living side by side” in peace, and noted that he has a one-year deadline for progress on his watch. He named Lt. Gen. William Fraser III, assistant to the Chairman of the Joint Chiefs of Staff, to monitor steps that both sides are making on the peace process, a U.S. official told The Associated Press. [complete article]