Mubarak’s offer was made in an apparent effort to raise his country’s role as Mideast peace broker and ease the pressure following an influx of Palestinians into Egypt from the Hamas-controlled Gaza Strip. [complete article]

Mubarak under pressure
By Ian Black, The Guardian, January 25, 2008

In Egypt, as elsewhere, all politics is ultimately local, and one serious problem for Mubarak is the link between the Brotherhood and Hamas, the Palestinian Islamist movement that won the 2006 elections and has been running Gaza since last summer’s coup, while keeping up (or failing to stop) daily salvoes of Qassam rockets being fired across the border into Israel.

Khaled Mishal, the influential Hamas leader in Damascus, has reportedly been on the phone to Mahdi Akef, the Brotherhood leader, to coordinate protests and maintain pressure. Both know this episode has been good for Hamas, bad for Mahmoud Abbas, the Palestinian president and Fatah leader who is committed to talks with Israel, as well as for Mubarak – and that it plays well with the Arab “street.”

Solidarity rallies with the Palestinians have been held from Mauritania in the far west of the Maghreb down to the Gulf. Al-Jazeera, the Arabic satellite TV channel, has been bombarding its viewers with the dramatic scenes from Gaza. [complete article] 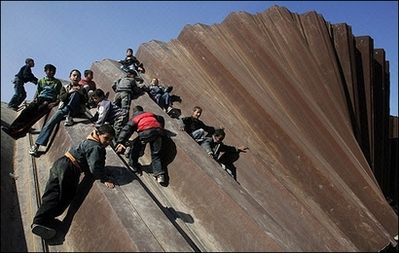 Wall comes tumbling down
By Seumas Milne, The Guardian, January 25, 2008

There was some speculation today – for example, by the commentator Talal ‘Awkal in the Palestinian daily al-Ayyam – that Israel appeared to be hoping for a reversion to Gaza’s pre-67 status when it was controlled by Egypt, perhaps as a precursor to bringing the West Bank back into the Jordanian orbit. That followed the remarks by Israel’s deputy defence minister Matan Vilnai on Thursday that the opening of the Rafah border could pave the way for Israel permanently to hand over all responsibility for supplying Gaza to Egypt.

Neither is a serious option. The Palestinian national genie cannot be put back in the bottle, despite current divisions. And Israel remains the fully responsible occupying power in Gaza, controlling its land access, sea and air space and conducting regular military operations in the territory at will.

Those “incursions” are supposedly carried out to end rocket attacks from Gaza into southern Israel. If so, they are hopelessly ineffective. Benjamin Pogrund asked this week: what can Israel do to stop the rockets, which spread fear and demoralisation in towns like Sderot, even if – unlike Israeli attacks on Gaza – they rarely kill? The obvious answer is to end its illegal occupation of the Palestinian territories and negotiate a just settlement for the refugees, ethnically cleansed nearly 60 years ago, (who, with their families, make up a majority of the Gaza Strip’s population). [complete article]

In a bold act of defiance, frustrated Palestinians trapped in the Gaza Strip on Friday confronted Egyptian security forces who were attempting to reseal the broken border, then brought in a bulldozer to open yet another breach.

As Egyptian forces in riot gear looked on, Palestinians rushed through the hole and abruptly halted Egypt’s attempts to close the border.

What was supposed to be the beginning of the end of a temporary escape valve for Gaza’s 1.5 million residents instead became a setback for Egyptian President Hosni Mubarak. [complete article]