Anguish of the Stolen Generations 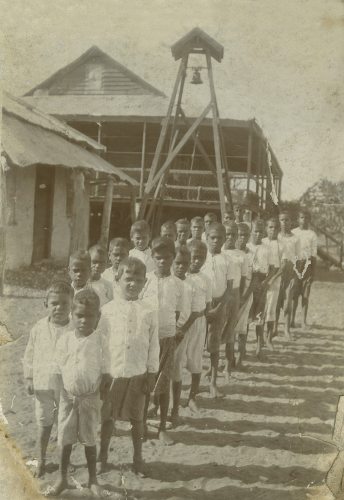 With torment still in his voice, Frank Byrne recalls the day six decades ago when he was taken from his mother and their community in Christmas Creek, Western Australia.

He was just five at the time, and his mother, Maudie Yooringun, had long feared the day that the government would come to seize him – and he would be “stolen”.

“The government came to Christmas Creek where we had a mud house and told me I was been taken away,” he said.

“My mum was completely ignored. She was not a human. That’s what they thought in those days. The government fella said: ‘I am your total guardian’.”

“You could see the sorrow in my mother’s eye. I could see the tears rolling down as she was driven away. I was held there by a couple of blokes as the truck went away.”

A week later Frank saw his mother again. But that was to be the last time he ever saw her alive.

Australia apology to Aborigines
The Australian government has made a formal apology for the past wrongs caused by successive governments on the indigenous Aboriginal population.

Prime Minister Kevin Rudd apologised in parliament to all Aborigines for laws and policies that “inflicted profound grief, suffering and loss”.

He singled out the “Stolen Generations” of thousands of children forcibly removed from their families.

When words aren’t enough
National Aboriginal Alliance spokesman Les Malezer last weekend said the apology was “not enough”. But even the alliance is prepared to defer compensation.

From a strategic angle, these indigenous leaders are fooling themselves or their constituents. If they were serious about compensation, the time to address it is at the same time as the apology. Blackfellas will get the words, the whitefellas will keep the money. And by Thursday the Stolen Generations and their apology will be over as a political issue.

The war against tolerance
Walid Shoebat, Kamal Saleem and Zachariah Anani are the three stooges of the Christian right. These self-described former Muslim terrorists are regularly trotted out at Christian colleges—a few days ago they were at the Air Force Academy—to spew racist filth about Islam on behalf of groups such as Focus on the Family. It is a clever tactic. Curly, Larry and Mo, who all say they are born-again Christians, engage in hate speech and assure us it comes from personal experience. They tell their audiences that the only way to deal with one-fifth of the world’s population is by converting or eradicating all Muslims. Their cant is broadcast regularly on Fox News, including the Bill O’Reilly and Neil Cavuto shows, as well as on numerous Christian radio and television programs. Shoebat, who has written a book called “Why We Want to Kill You,” promises in his lectures to explain the numerous similarities between radical Muslims and the Nazis, how “Muslim terrorists” invaded America 30 years ago and how “perseverance, recruitment and hate” have fueled attacks by Muslims.

Israel embassies on high alert following Mughniyah killing
Israel’s security services have issued orders to its embassies and delegations abroad to be on high alert following the assassination of Hezbollah terror leader Imad Mughniyah on Wednesday, anticipating the possibility that Hezbollah will try to carry out a major attack against Israeli or Jewish targets worldwide in response to the killing.

Whoever killed Mughniyah showed impressive capabilities
In the case of the killing of Mughniyah we can draw two opposing conclusions. One is that the killing created shock and awe in Hezbollah and damaged its self-confidence. There is no doubt that the killing sent an unequivocal message to Nasrallah that maybe he should lower his profile of arrogance and self-confidence.
[…]
The second conclusion is that in the long run Hezbollah will clearly recover from the killing and return to functioning normally as a political movement with its own militia that has an organization for carrying out terror attacks.

The announcement by Housing Minister Zeev Boim appeared to be aimed at placating the Shas religious party, which had vowed to quit the coalition government if it conceded anything to the Palestinians on Jerusalem.

Arab states plan TV crackdown
In a collective effort to curb satellite channels such as al-Jazeera, Arab states have adopted a charter that authorises individual countries to penalise media organisations deemed to have offended political and religious leaders or to have damaged social harmony and national unity.

Only Qatar, home to al-Jazeera, refused to endorse the document citing the need to study it further to ascertain that it did not ­conflict with its legislation.

Muqtada, the man who would be ayatollah
As a political and military force, Iraq’s Shi’ite Sadrist movement has undergone a number of radical transformations since 2003, when its leader Muqtada al-Sadr surprisingly emerged as a leading political figure. Muqtada’s recent decision to continue with his seminary studies and graduate as an ayatollah at the conservative seminary school of Najaf underpins a major change in the movement’s structure that could have serious repercussions for the future of Iraq.

Against the backdrop of changing political alliances between Kurds and Sunnis, Muqtada is transforming his movement into a new political phenomenon with implications for the country’s political structure and security dynamics. The consequences are also immense for Shi’ite Iraq, posing serious challenges to the conservative clerical establishment in Najaf.

Muqtada’s attempt to become an ayatollah follows his earlier call to suspend operations by his militia, the Jaish al-Mahdi (The Mahdi Army, or JaM) in the summer of 2007. Together with his decision to study in Najaf, this has marked a decisive new beginning in the organizational structure and leadership dynamics of the Mahdi militia.

McCain votes against waterboarding ban
Today, the Senate brought the Intelligence Authorization Bill to the floor, which contained a provision from Sen. Dianne Feinstein (D-CA) establishing one interrogation standard across the government. The bill requires the intelligence community to abide by the same standards as articulated in the Army Field Manual and bans waterboarding.

Earlier today, ThinkProgress noted that Sen. John McCain (R-AZ), a former prisoner of war, has spoken strongly in favor of implementing the Army Field Manual standard. When confronted today with the decision of whether to stick with his conscience or cave to the right wing, McCain chose to ditch his principles and instead vote to preserve waterboarding.

Senate passes interrogation ban
The Senate voted 51 to 45 on Wednesday afternoon to ban waterboarding and other harsh interrogation methods used by the Central Intelligence Agency against high-level terrorism suspects.

Senate Republicans generally opposed the bill, but several of them also did not want to cast a vote that could be construed as supporting torture, and so were relying on President Bush to make good on a threat to veto legislation limiting C.I.A. interrogation techniques.

The prohibition of harsh interrogation techniques is part of a wider intelligence authorization bill and would restrict all American interrogators to techniques allowed in the Army Field Manual, which bars the use of physical force.

In tribal Pakistan, religious parties are foundering
Senator Asfandyar Wali, the leader of an opposition party, the Awami National Party, is campaigning for the elections next week from the safety of his bed, under a quilt and propped up on bolsters for his bad back at his country home outside Peshawar.

Ill health aside, Mr. Wali is staying home because suicide bombers are seeking to kill him, his party has been warned by high-level government officials. There have been two bomb attacks on his party’s election gatherings in the last week. Two candidates have been killed, one in a suicide bombing and one in a shooting in Karachi.

Yet despite the attacks and the limited campaigning, his party is expected to do well in the parliamentary elections on Monday. The religious parties that for the last five years have governed the North-West Frontier Province and Baluchistan Province, which border Afghanistan and the tribal areas, are foundering.