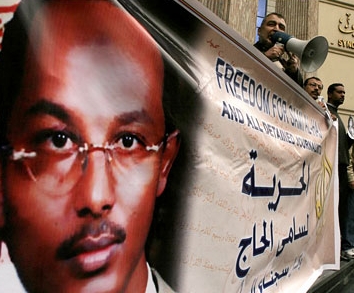 The most famous journalist you may never have heard of is Sami al-Hajj, an Al Jazeera cameraman who is on a hunger strike to protest abuse during more than six years in a Kafkaesque prison system.

Mr. Hajj’s fortitude has turned him into a household name in the Arab world, and his story is sowing anger at the authorities holding him without trial.

That’s us. Mr. Hajj is one of our forgotten prisoners in Guantánamo Bay.

If the Bush administration appointed an Under Secretary of State for Antagonizing the Islamic World, with advice from a Blue Ribbon Commission for Sullying America’s Image, it couldn’t have done a more systematic job of discrediting our reputation around the globe. Instead of using American political capital to push for peace in the Middle East or Darfur, it is using it to force-feed Mr. Hajj.

US official admits waterboarding presently illegal
A senior official in the Bush justice department said for the first time today that the controversial interrogation tactic is currently illegal.

The waterboarding remarks by Stephen Bradbury, head of the justice department office of legal counsel, caused a stir in America because they go further than more uncertain opinions on the legality of the tactic voiced by the CIA director and attorney general.

In an interview with the BBC he said information obtained from alleged terrorists helped save lives, and the families of the July 7 victims would understand that. Bush said waterboarding, which simulates drowning, was not torture and is threatening to veto a congressional bill that would ban it.

Duet in Damascus – is it déja vu?
By Amir Mizroch, Jerusalem Post, February 14, 2008
Duet in Beirut by former Mossad operative Mishka Ben-David is a work of fiction, but owes its wealth of detail to the author’s intelligence experience. Published in Hebrew six years ago, it describes a Mossad hit team traveling to Beirut, stalking the head of Hizbullah’s foreign terror department and assassinating him in a car bombing. Perhaps unfortunately for Mughniyeh, it was not translated into Arabic; had he read it, he might have taken greater precautions.

While Ben-David is careful to say that Israel may not have been behind Mughniyeh’s killing, he does detail several examples of how the planned killing of the fictional Abu Khaled might mirror the death of Mughniyeh.

Roiled Hezbollah chief throws down the gauntlet
By Zvi Bar’el, Haaretz, February 15, 2008
When Hassan Nasrallah quotes David Ben-Gurion to emphasize to Israel that “if it loses one war, it will collapse,” or the Winograd report to impress his supporters with the fact that Israel lost the fight against several thousand Hezbollah fighters, we can once more be impressed that he and his advisers follow what is going on in Israeli society far more closely than Israel follows developments in Lebanon. But Nasrallah also knows that sharp rhetoric and expert usage of language are no substitute for a plan of action.

He presented his plan Thursday in his speech by setting the rules for war against Israel: “If you want an open-ended war, it will be an open-ended war,” and he also explained what this would entail. Because Hezbollah blames Israel for the assassination of Imad Mughniyah, which it claims occured “outside the natural arena of the war” (in other words Syria and not in Lebanon), the organization considers it legitimate to use the same method and target Israel outside the “natural arena”: not directly on Israeli territory but against Israeli targets abroad. Thus, Nasrallah absolved himself of the rules he followed for years, according to which he was conducting a war of Lebanese liberation against Israeli occupation. Henceforth, he is adopting a war on behalf of the organization, not in the name of Lebanon, against Israel’s existence.

Iraq successes hang in the balance
By William M. Arkin, Washington Post, February 14, 2008
We have heard a lot in the past year about the Sunni Awakening movement in Al Anbar province in western Iraq, the development of a Concerned Local Citizens program (also known as the Sons of Iraq program) in Baghdad, and the unilateral cease-fire called by Moqtada al-Sadr’s Mahdi Army Shia militias. These three developments have not only been key to American military gains, but they also are central to the possibility of successful civil society and the prospects for transitioning from the military mission. [Deputy assistant secretary of defense for Middle East affairs, Mark] Kimmitt frankly calls all of these developments in 2007 a “surprise.” They are also factors most outside of U.S. control.

“The success of the surge was not pre-ordained nor has the surge succeeded according to plan,” Kimmitt says. “No one last December had any ideas that we would see a Sunni Awakening movement, nobody knew that the … [Mahdi Army] would declare a ceasefire …”

Bush’s Iraq calculus
By David Ignatius, Washington Post, February 14, 2008
The last thing the Bush White House would want, you might think, would be to make the 2008 presidential election a referendum on the unpopular war in Iraq. The 2006 congressional elections were such a referendum, and the Republicans got hammered.

But President Bush, newly confident that his troop-surge strategy is working, is taking steps that are likely to guarantee another Iraq-driven election. He favors keeping a big U.S. force in Iraq through the November elections, probably close to the pre-surge level of 130,000 troops. That large presence will draw Democratic fire — and it will make the presidential contest all the more a test between a pro-war Republican nominee and an antiwar Democrat.

Iran postpones talks with U.S. on Iraq
American officials ratcheted up the accusations against Iran today as Tehran postponed another round of negotiations with the United States over security in Iraq.

The development came as the Iraqi government announced that Iranian President Mahmoud Ahmadinejad would arrive March 2 for a two-day visit, the first such trip by an Iranian leader since the two countries fought a devastating war in the 1980s that killed or injured an estimated 1 million people.

The United States and Iran, already locked in a dispute over Tehran’s nuclear program, have long traded blame for the bloodshed in Iraq. But U.S. officials softened their tone late last year, backing away from sweeping accusations that Iran is orchestrating the funding, training and equipping of Shiite Muslim militants who have battled U.S. soldiers here.

In a reversal, U.S. agrees to produce data pointing to Iran’s nuclear ambitions
The Bush administration has agreed to turn over to international inspectors intelligence data it has collected that it says proves Iran worked on developing a nuclear weapon until a little more than four years ago, according to American and foreign diplomats.

The decision reverses the United States’ longstanding refusal to share the data, citing the need to protect intelligence sources.

The administration acted as the International Atomic Energy Agency is scheduled to issue a report as early as next week on Iran’s past nuclear activities. Administration officials hope that the nuclear inspectors can now confront Iran with what the Americans believe is the strongest evidence that the Iranians had a nuclear program.