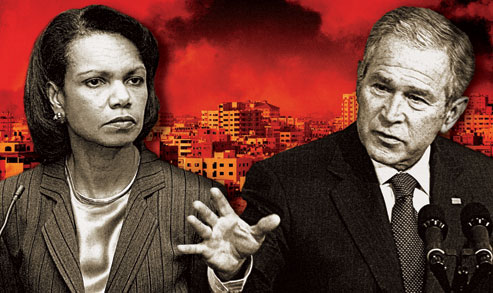 The Gaza bombshell
By David Rose, Vanity Fair, April, 2008
Vanity Fair has obtained confidential documents, since corroborated by sources in the U.S. and Palestine, which lay bare a covert initiative, approved by Bush and implemented by Secretary of State Condoleezza Rice and Deputy National Security Adviser Elliott Abrams, to provoke a Palestinian civil war. The plan was for forces led by Dahlan, and armed with new weapons supplied at America’s behest, to give Fatah the muscle it needed to remove the democratically elected Hamas-led government from power. (The State Department declined to comment.)

But the secret plan backfired, resulting in a further setback for American foreign policy under Bush. Instead of driving its enemies out of power, the U.S.-backed Fatah fighters inadvertently provoked Hamas to seize total control of Gaza.

Some sources call the scheme “Iran-contra 2.0,” recalling that Abrams was convicted (and later pardoned) for withholding information from Congress during the original Iran-contra scandal under President Reagan. There are echoes of other past misadventures as well: the C.I.A.’s 1953 ouster of an elected prime minister in Iran, which set the stage for the 1979 Islamic revolution there; the aborted 1961 Bay of Pigs invasion, which gave Fidel Castro an excuse to solidify his hold on Cuba; and the contemporary tragedy in Iraq.

Good morning, Hamas
By Uri Avnery, Rootless Cosmopolitan, March 2, 2008
But how can one reach a settlement with an organization that declares that it will never recognize Israel and whose charter calls for the destruction of the Jewish state?

All this matter of “recognition” is nonsense, a pretext for avoiding a dialogue. We do not need “recognition” from anybody. When the United States started a dialogue with Vietnam, it did not demand to be recognized as an Anglo-Saxon, Christian and capitalist state.

If A signs an agreement with B, it means that A recognizes B. All the rest is hogwash.

And in the same matter: The fuss over the Hamas charter is reminiscent of the ruckus about the PLO charter, in its time. That was a quite unimportant document, which was used by our representatives for years as an excuse to refuse to talk with the PLO. Heaven and earth were moved to compel the PLO to annul it. Who remembers that today? The acts of today and tomorrow are important, the papers of yesterday are not.

Truce or bloodbath
By Azzam Tamimi, The Guardian, March 3, 2008
A recent poll published in the Israeli daily Ha’aretz suggested that 64% of Israelis favoured a negotiated truce with Hamas. But in the past few days, a military onslaught that has so far claimed more than a hundred Palestinian lives, mostly women and children, has made it clear that the Israeli leadership is not interested in any peaceful exit from the current predicament.

The Ha’aretz poll may point to a lack of confidence in the government’s ability to settle its problem with Gaza through the use of force, and vindicate those within the military and intelligence community who have been advising the Israeli prime minister, Ehud Olmert to talk to Hamas. A truce as once proposed by Giora Eiland, who served as national security adviser to the former prime minister Ariel Sharon, would entail a reasonable exchange of prisoners and a lifting of sanctions in exchange for a cessation of all hostilities between the two sides. Hamas would, in principle, have agreed to negotiate a truce along these terms. But it seems that Olmert’s cabinet has not given up on the idea of bringing Hamas to its knees or finishing it off altogether.

Israel can either reoccupy Gaza or talk with Hamas; there’s no other way
By Nahum Barnea, Ynet, March 2, 2008
Just like Hizbullah did on the fourth day of the war in the north, Hamas is now asking, implicitly if not explicitly, for a ceasefire.

In Hamas’ view, it achieved everything it could get: It proved its stamina, the ability to launch rockets, and the ability to fight. The time has come to rehabilitate and rearm.

In July 2006, the government insisted on ignoring the requests for a ceasefire and continuing the fighting. That was a tragic mistake. Yet Lebanon is one thing and Gaza is another thing. Israel’s dilemma vis-à-vis Hamas is fundamentally different than the dilemma it was facing vis-à-vis Hizbullah.

The government of Israel has been postponing the decision on how to handle the Hamas regime in Gaza for eight and a half bloody months.

The time has come to decide.

Hamas wants lull in Gaza, but only on its own terms
By Amos Harel and Avi Issacharoff, Haaretz, March 3, 2008
The prevailing opinion in the government and Israel Defense Forces leadership on Sunday was that Hamas wants to end the current round of fighting with Israel. The Palestinians, it is thought, have suffered a nearly intolerable amount of casualties this past week and are looking for a way out of the hostilities.

But it appears that Israel forgot to take into consideration Hamas’ military wing, whose operatives have continued to launch Qassam and Grad Katyusha rockets on the western and northern Negev.

Sunday’s fighting was indeed more limited than the blood-drenched violence on Saturday. But some 40 rockets in one day, in addition to >12 Palestinian fatalities, cannot be considered a return to normal. In principle, the Israeli view is logical: Hamas is indeed interested in a lull. But at least for the meantime, despite the pressure being exerted by the IDF, the organization is prepared to agree to a cessation of hostility only on its own terms – after it proves that it can withstand Israel’s steamroller.

The ‘laptop of mass destruction’
By Gareth Porter, Asia Times, March 4, 2008
The George W Bush administration has long pushed the “laptop documents” – 1,000 pages of technical documents supposedly from a stolen Iranian laptop – as hard evidence of Iranian intentions to build a nuclear weapon. Now charges based on those documents pose the only remaining obstacles to the International Atomic Energy Agency (IAEA) declaring that Iran has resolved all unanswered questions about its nuclear program.

But those documents have also been regarded with great suspicion by US and foreign analysts. German officials identified the source of the laptop documents in November 2004 as the Mujahideen e-Khalq (MEK), which along with its political arm, the National Council of Resistance in Iran (NCRI), is listed by the US State Department as a terrorist organization.

There are some indications, moreover, that the MEK obtained the documents not from an Iranian source but from Israel’s Mossad.

A solution for the US–Iran nuclear standoff
By William Luers, Thomas R. Pickering, and Jim Walsh, New York Review of Books, March 20, 2008
The recent National Intelligence Estimate’s conclusion that Tehran stopped its efforts to develop nuclear weapons in 2003, together with the significant drop in Iranian activity in Iraq, has created favorable conditions for the US to hold direct talks with Iran on its nuclear program. The Bush administration should act on this opportunity, if for no other reason than that its current position is growing weaker, and without such an initiative, Iran will continue its efforts to produce nuclear fuel that might, in the future, be used to build nuclear weapons.

Currently, Iran has approximately three thousand centrifuges, which it has used to produce small test batches of uranium that has been enriched to a low level (which cannot be used for nuclear weapons). Until now, Iranian engineers have not successfully operated a centrifuge cascade (a collection of centrifuges working together) at full capacity—which, as a practical matter, would be needed to enrich nuclear fuel to the level necessary either to establish an effective nuclear energy program or to manufacture nuclear weapons. But the Iranian government has declared its ambition to build more than 50,000 centrifuges, and recent reports also suggest that Tehran is testing a modified “P-2” centrifuge, a more advanced version of its existing centrifuge technology, which can produce a larger volume of enriched uranium.

We propose that Iran’s efforts to produce enriched uranium and other related nuclear activities be conducted on a multilateral basis, that is to say jointly managed and operated on Iranian soil by a consortium including Iran and other governments. This proposal provides a realistic, workable solution to the US–Iranian nuclear standoff. Turning Iran’s sensitive nuclear activities into a multinational program will reduce the risk of proliferation and create the basis for a broader discussion not only of our disagreements but of our common interests as well.