The bullies converge
By John Robertson, War in Context, March 3, 2008 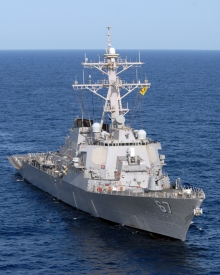 28 and 29 February: the US parks the USS Cole off the shore of Lebanon. Uh-oh.

1 March: Israeli forces launch a major operation into Gaza, killing as many as 60 Palestinians, many of them civilians and children.

Senators Clinton, McCain, and Obama daily wage verbal slugfests on national security, the US’s proper role in the Middle East, and which of them will be best prepared to defend “our strong ally” Israel. OK, business as usual in an election year?

The timing here ought to be raising antennae here in the US. You can bet that the Arab and Iranian “street” will be taking due note.

The arrival of a US Navy vessel off the coast of Lebanon had to send chills up the spines of many Lebanese. As Roger Morris recently reminded us in his chronicle of the life of Hezbollah “engineer” Imad Mugnieh, the US Navy has pumped shells into Lebanese villages on several occasions (even rolling out a World War II era battleship, the USS New Jersey, on one occasion to use its huge shells to get maximum killing and intimidation effect on the unfortunate villagers on whom they rained down ). That was in the context of the Lebanese civil war of 1975-1990, which featured ongoing deadly scrums involving the IDF, the PLO, and various Lebanese militias – Christian and Muslim, including the newly established Hezbollah. In the summer of 2006, Israel and Hezbollah got into it again, with horrific toll in life and infrastructure (especially on the Lebanese side) while US Secretary of State Condoleeza Rice, as a rather ghoulish birthing coach, urged on the IDF during what she then called the “birth pangs of a new Middle East.” Now, in March 2008, the Lebanese government is mired in a parliamentary impasse, unable to elect a new president. Not yet a full-fledged civil war in Lebanon, but the US Navy lies offshore again, this time, we’re told, to signal to Hezbollah (which is now a legitimately constituted, democratically elected political party in Lebanon’s political structure) that the US will tolerate no stronger interference from them (or from Syria or Hezbollah’s ally and patron, Iran) as Lebanon’s struggles continue.

Yet the very next day, the IDF launched its deadly raid into Gaza, knowing that Hamas forces would resist with whatever means they could muster but would be ultimately powerless to change the outcome. Might they assume (dare we say, hope?) that Hezbollah and Iran might find this an unacceptable provocation and wish to retaliate against Israel? Except that – gosh, wouldn’t you know it? – the US Navy is parked right offshore. And wouldn’t you know it? It’s the USS Cole, the same USS Cole in whose side an al-Qaeda suicide boat blew a hole in those distant days before 9-11. The irony is palpable – indeed, dare we say, intended? Certainly, from the US perspective, delicious.

So, with the US looming in the wings, Israel can do what it wants to in Gaza. And if Hezbollah (and, by implication, Iran) decide not to respond to Israel’s wanton holocaust of innocent Palestinians in Gaza (whose lives had already been made miserable by Israel’s US-approved blockade), they run the risk of accusations of cowardice in the face of the Zionist bullies. If they were to rise to the bait and retaliate, they run the risk of the bullies turning against them and trying to flatten them. Israeli prime minister Olmert will jump at the chance to atone for the disaster of the summer 2006 war, and George Bush may get the military confrontation with Iran that he well may have been hoping for all along.

And all the while, our senator-candidates must intone their often rehearsed mantra, “Israel has the right to defend itself against the terrorists.” The US Navy offshore, the US presidential candidates cowed by political realities in an election season — how much better cover could the bully have?

John Robertson is a professor of Middle East history at Central Michigan University and has his own blog, Chippshots.

Editor’s Comment — It’s worth recalling that less than two weeks before the beginning of the 2006 Lebanon War, Israel was in the middle of pounding Gaza in what Mahmoud Abbas described as an “unacceptable and barbaric collective punishment of civilians, including women, children and old people.”