Suppose Thomas Jefferson and the other founding fathers of American democracy had been able to see into the future. As they looked forward to the America of 2008, what would have held their attention more firmly?

That the society they helped form was to make such significant advances towards equality that two people who once would not even have been able to vote would now be vying to become president?

Or, that a momentous democratic choice might hinge on the effect of a few emotive phrases uttered by a man not even running for office?

A couple of days ago in Time magazine, Joe Klein wrote:

Whether Obama survives now will depend on the most important and overlooked part of his speech [in Philadelphia] — the final section, in which he challenged the public and, especially, the media to stow the sensationalism: “We can play Reverend Wright’s sermons on every channel, every day … and make the only question in this campaign whether or not the American people think that I somehow believe or sympathize with his most offensive words,” he said. “But if we do, I can tell you that in the next election we’ll be talking about some other distraction … And nothing will change … Or, at this moment in this election, we can come together and say, ‘Not this time.'”

And that is the existential challenge of 2008: whether we will have a big election or a small one. Will we have a serious conversation about the enormous problems confronting the country — the wars, the economic crisis, the looming environmental cataclysm — or will we allow the same old carnival of swift boats and sound bites? The answer depends on the candidates, of course, and on the media — where cynicism too often passes for insight. But most of all, it depends on you.

Klein notes that Obama challenged the public “and especially the media” to turn away from the distractions that could prevent this from being “a big election,” yet he almost immediately lets the media off the hook. The existential challenge of 2008, he says, most of all “depends on you.”

Taken literally, that’s indisputable. We’re the ones who get to decide how we vote. Yet what Klein does — what everyone in the media does when their preeminent loyalty attaches to their paycheck — is to refuse to point a spotlight on the individuals who shape the news from the shadows.

In every single newsroom on every single day, commercial and political decisions are being made while cloaked under the pretense that events themselves are the overwhelming force that steers editorial judgment. But consider how little we actually know about the decision-making process that triggered what has become the most explosive story in the presidential campaign.

On Good Morning America on March 13, Brian Ross with the stealth of a terrorist who is just about to set off a bomb, uttered these seemingly innocent words: “… an ABC News review of more than a dozen sermons… ” — and we all know what followed.

What we don’t know, but what could be as illuminating as the DVDs themselves, is what led ABC News to be conducting a review of Rev Jeremiah Wright’s sermons in the first place.

For months, everyone who had been paying much attention knew that Wright’s connection with Obama had the potential to wreak political havoc. In an interview with the New York Times in March 2007, Rev Wright’s explanation for why he had been disinvited from Obama’s presidential announcement was that the senator had told him, “You can get kind of rough in the sermons, so what we’ve decided is that it’s best for you not to be out there in public.”

It was a decision that drew criticism from other black leaders because, as Al Sharpton put it, “the issue is standing by your own pastor.” A month earlier, a Rolling Stone article had identified Wright as an emblem of Obama’s “radical roots.” And a year later, Tim Russert as presidential debate moderator-cum-inquisitor had cited Wright in order to find out whether Obama was willing to denounce and reject Louis Farrakhan.

So, while every cable news channel has followed ABC News‘ lead and made Rev Wright campaign issue #1, no one has been pressing the ABC News investigative team to explain how exactly it came to set the political agenda.

Was the Good Morning America story the fruit of a tenacious piece of investigative journalism, or might it on the contrary have been an altogether lazy piece of journalism — a case of someone saying, “Here’s the ammo. All you need to do is load and fire”?

When news isn’t new then this issue of timing means that newsmaking is taking place inside the newsroom. The media has become manufacturer. Might we be allowed to become privy to the process?

For instance, it’s obvious why the ABC News editors would deem a line such as “America’s chickens are coming home to roost” as newsworthy. But how did they decide that most of what came immediately after that line was irrelevant. Would most Americans not have responded in a different way if they had then heard Wright say:

Violence begets violence. Hatred begets hatred. And terrorism begets terrorism. A white ambassador [Edward Peck] said that y’all, not a black militant. Not a reverend who preaches about racism. An ambassador whose eyes are wide open and who is trying to get us to wake up and move away from this dangerous precipice upon which we are now poised. The ambassador said the people we have wounded don’t have the military capability we have. But they do have individuals who are willing to die and take thousands with them. And we need to come to grips with that. 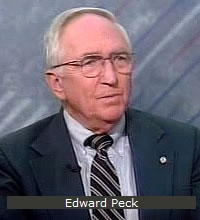 Rev Wright was telling his congregation, pay attention to this white man, Edward Peck. It’s worth listening to what he has to say. It’s worth taking into consideration the opinion of a man who had been the Deputy Director of the White House Task Force on Terrorism under President Ronald Reagan, former Deputy Coordinator, Covert Intelligence Programs at the State Department, U.S. Ambassador and Chief of Mission to Iraq (1977-1980), and a 32-year veteran of the Foreign Service. At least, as far as Rev Wright was concerned, Edward Peck was worth listening to and that’s what he told his congregation.

On October 8, 2001, on CNN, Peck was asked: “Wouldn’t this war against terrorism be a mistake if we stop at Osama bin Laden and don’t take out Saddam Hussein as well?”

Peck said it would not be a mistake because, “when you take out Saddam Hussein, the key question you have to ask then is, what happens after that? And we don’t have a clue. Nobody knows, but it’s probably going to be bad. And a lot of people are going to be very upset about that, because that really is not written into our role in this world is to decide who rules Iraq.”

Rev Wright suggested that “in the wake of the American tragedy” of 9/11, in a process of self-examination, it would really be in America’s interests to listen to people such as Edward Peck. ABC News and much of the rest of the media would rather that we pay attention to a few ill-chosen phrases.

5 thoughts on “CAMPAIGN 08 EDITORIAL: With attention to the unseen”