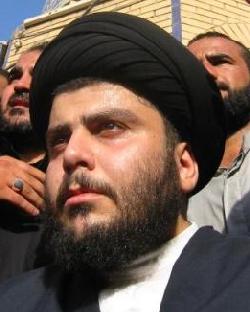 he Iraqi military’s offensive in Basra was supposed to demonstrate the power of the central government in Baghdad. Instead it has proven the continuing relevance of anti-American cleric Moqtada al-Sadr. Sadr’s militia, the Mahdi Army, stood its ground in several days of heavy fighting with Iraqi soldiers backed up by American and British air power. But perhaps more important than the manner in which the militia fought is the manner in which it stopped fighting. On Sunday Sadr issued a call for members of the Mahdi Army to stop appearing in the streets with their weapons and to cease attacks on government installations. Within a day, the fighting had mostly ceased. It was an ominous answer to a question posed for months by U.S. military observers: Is Sadr still the leader of a unified movement and military force? The answer appears to be yes.

In the view of many American troops and officers, the Mahdi Army had splintered irretrievably into a collection of independent operators and criminal gangs. Now, however, the conclusion of the conflict in Basra shows that when Sadr speaks, the militia listens.

That apparent authority is in marked contrast to the weakness of Iraq’s prime minister, Nouri al-Maliki. He traveled south to Basra with his security ministers to supervise the operation personally. After a few days of intense fighting he extended his previously announced deadline for surrender and offered militants cash in exchange for their weapons. Yet in the ceasefire announcement the militia explicitly reserved the right to hold onto its weapons. And the very fact of the ceasefire flies in the face of Maliki’s proclamation that there would be no negotiations. It is Maliki, and not Sadr, who now appears militarily weak and unable to control elements of his own political coalition. [complete article]

Despite the cease-fire called Sunday by Shiite leader Sayyid Muqtada al-Sadr, leader of the millions-strong Sadr Movement, last week’s battles between the Mahdi army and the Iraqi army revealed the continued weakness and instability of al-Maliki’s government. Al-Maliki went to Basra on Monday, March 24, to oversee the attack on city neighborhoods loyal to al-Sadr. By Friday, the Iraqi minister of defense, Abdul Qadir Jasim, had to admit in a news conference in Basra that the Mahdi army had caught Iraqi security forces off guard. Most Sadrist neighborhoods fought off the government troops with rocket-propelled grenades and mortar fire. At the same time, the Mahdi army asserted itself in several important cities in the Shiite south, as well as in parts of Baghdad, raising questions of how much of the country the government really controls. Only on Sunday, after the U.S. Air Force bombed some key Mahdi army positions, was the Iraqi army able to move into one of the Sadrist districts of Basra. [complete article]

The Iranian general who helped broker an end to nearly a week of fighting between Iraqi government forces and Shiite Muslim militiamen in southern Iraq is an unlikely peacemaker.

His role as peacemaker, which McClatchy first reported Sunday, underscores Iran’s entrenched political power and its alliances in Iraq, according to analysts. [complete article]

Editor’s Comment — For five years, the US and its allies in Iraq have indulged in a modulated fantasy. To begin with it was that Moqtada al Sadr could be ignored — that he was an upstart deserving contempt. Once it became clear that he couldn’t be ignored, the aim turned to his destruction. Once it became clear that he and his movement could not be destroyed, hopes turned to his pacification. If he could be politically accommodated, he might lose his political fire and thence fall by the wayside. All along, the press has helped reinforce the administration’s efforts to brand Sadr by referring to him as radical, anti-American, rebel, fiery, militant, hardline, rabble-rousing, demagogue and a firebrand. What few have been willing to acknowledge is that over the span of the last five years, there is no one else in Iraq whose authority has been as durable or as demonstrable.

Just over a month ago, US Central Command issued a press release in response to Sadr’s extension of his militia’s ceasefire. It said:

Those who continue to honor al-Sayyid Muqtada al-Sadr’s pledge will be treated with respect and restraint. Those who dishonor the Sadr pledge are regrettably tarnishing both the name and the honor of the movement…. [We] welcome an opportunity to participate in dialogue with the Sadr Trend and all groups who seek to bring about reconciliation in building the new Iraq.

This might have just been empty rhetoric, but I think that it more likely reflects that the US military is slightly ahead of its political leadership in starting to recognize that it’s time to show Sadr more respect. If the idea that he was going to fade away has managed to be a very durable fantasy — especially among those who have had equally durable dreams of success in Iraq — the time to wake up to the reality of Sadr’s political authority is long overdue.