The green light
By Philippe Sands, Vanity Fair, May, 2008 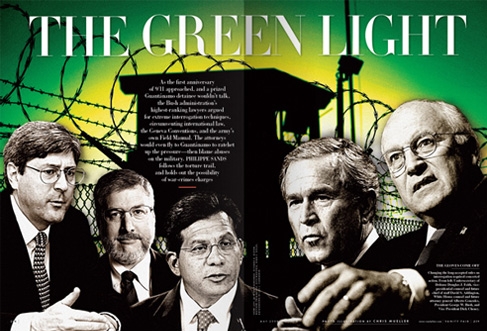 The abuse, rising to the level of torture, of those captured and detained in the war on terror is a defining feature of the presidency of George W. Bush. Its military beginnings, however, lie not in Abu Ghraib, as is commonly thought, or in the “rendition” of prisoners to other countries for questioning, but in the treatment of the very first prisoners at Guantanamo. Starting in late 2002 a detainee bearing the number 063 was tortured over a period of more than seven weeks. In his story lies the answer to a crucial question: How was the decision made to let the U.S. military start using coercive interrogations at Guantanamo?

The Bush administration has always taken refuge behind a “trickle up” explanation: that is, the decision was generated by military commanders and interrogators on the ground. This explanation is false. The origins lie in actions taken at the very highest levels of the administration—by some of the most senior personal advisers to the president, the vice president, and the secretary of defense. At the heart of the matter stand several political appointees—lawyers—who, it can be argued, broke their ethical codes of conduct and took themselves into a zone of international criminality, where formal investigation is now a very real option. This is the story of how the torture at Guantanamo began, and how it spread. [complete article]