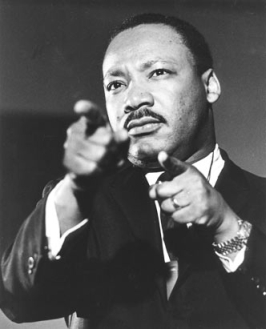 n the 40th anniversary of Martin Luther King Jr.’s death, few truths ring louder than this: Barack Obama and Jeremiah A. Wright Jr. express in part the fallen leader’s split mind on race, a division marked by chronology and color.

Before 1965, King was upbeat and bright, his belief in white America’s ability to change by moral suasion resilient and durable. That is the leader we have come to know during annual King commemorations. After 1965, King was darker and angrier; he grew more skeptical about the willingness of America to change without great social coercion.

King’s skepticism and anger were often muted when he spoke to white America, but they routinely resonated in black sanctuaries and meeting halls across the land. Nothing highlights that split — or white America’s ignorance of it and the prophetic black church King inspired — more than recalling King’s post-1965 odyssey, as he grappled bravely with poverty, war and entrenched racism. That is the King who emerges as we recall the meaning of his death. After the grand victories of the Civil Rights Act of 1964 and the 1965 Voting Rights Act, King turned his attention to poverty, economic injustice and class inequality. King argued that those “legislative and judicial victories did very little to improve” Northern ghettos or to “penetrate the lower depths of Negro deprivation.” In a frank assessment of the civil rights movement, King said the changes that came about from 1955 to 1965 “were at best surface changes” that were “limited mainly to the Negro middle class.” In seeking to end black poverty, King told his staff in 1966 that blacks “are now making demands that will cost the nation something. … You’re really tampering and getting on dangerous ground because you are messing with folk then.” [complete article]

Obama could actually win this thing (the Pa. primary)
By John Baer, Philadelphia Inquirer, April 4, 2008
The average of multiple new polls, including one putting him slightly ahead, shows he has trimmed a large Clinton lead – 20 points in January, 16 last month – down to single digits, at 5.4.

His campaign yesterday announced that it raised $40 million in March amid persistent chatter that Hillary’s running low and reports that she raised just half that.

While her Democratic presidential rival took the day off in Chicago, Clinton held two fundraisers in Los Angeles and planned to raise money in New Mexico this weekend. She will leave the campaign trail on Wednesday to attend an Elton John concert in New York organized with a goal to raise $2 million.

In an attempt to further tap the online donor market that has largely funded Obama’s effort, Clinton plans to launch a new Internet program today that lets supporters choose where their money will go, much as wedding guests select gifts from a registry. Instead of china and crystal, users can purchase campaign signs, van rentals, airtime on radio stations and doorknob advertisements.

The desertions in the heat of a major battle cast fresh doubt on the effectiveness of the American-trained Iraqi security forces. The White House has conditioned further withdrawals of American troops on the readiness of the Iraqi military and police.

The crisis created by the desertions and other problems with the Basra operation was serious enough that Prime Minister Nuri Kamal al-Maliki hastily began funneling some 10,000 recruits from local Shiite tribes into his armed forces. That move has already generated anger among Sunni tribesmen whom Mr. Maliki has been much less eager to recruit despite their cooperation with the government in its fight against Sunni insurgents and criminal gangs.

Iraq: Dark shadows of things to come
By Wayne White, Middle East Institute, April 3, 2008
The Nuri al Maliki government’s failure to defeat Muqtada al-Sadr’s Mahdi Army in Basra is yet another indication that beneath the widely acclaimed “success” of the surge is a country largely bereft of the legitimate governance required for genuine stability. Iran’s intermediary role between Maliki and Sadr suggests that what passes for an Iraqi central government is, in fact, little more than another actor on an Iraqi political scene still badly fragmented along factional lines.

At the conclusion of Prime Minister Maliki’s determined effort to wrest control of much of Basra from Sadr’s fighters, Sadr’s people reportedly controlled even more of the city than before. The government has lost face, Sadr’s standing has been considerably enhanced, and his defiance of the government, which he labeled a “Satan” in an interview with al-Jazeera, is unshaken. Past US and Iraqi government efforts to wear down Sadr’s forces with scattered attacks and arrests clearly have had little impact. Indeed, a Mahdi Army commander in Baghdad bragged last week: “We can take on anyone now.”

The popular appeal of the brash, anti-American and nationalistic young cleric among vast numbers of downtrodden Shi’a has been powerful. It may now exceed that of other more established movements such as that of leading rival Abdul Aziz al-Hakim’s Islamic Supreme Council of Iraq (ISCI).

Basra assault exposed U.S., Iraqi limits
By Sudarsan Raghavan and Ernesto Londono, Washington Post, April 4, 2008
When Iraqi Prime Minister Nouri al-Maliki launched an offensive in Basra last week, he consulted only his inner circle of advisers. There were no debates in parliament or among his political allies. Senior American officials were notified only a few days before the operation began.

He was determined to show, his advisers said, that Iraq’s central government could exert order over a lawless, strategic port city ruled by extremist militias. The advisers said Maliki wanted to demonstrate that he was a strong leader who could shed his reputation as a sectarian figure by going after fellow Shiites, and who could act decisively without U.S. pressure or assistance.

A week later, his ultimately unsuccessful gambit has exposed the shaky foundation upon which U.S. policy in Iraq rests after five years of war, according to politicians and analysts. Gen. David H. Petraeus, the top military commander in Iraq, and U.S. Ambassador Ryan C. Crocker are to report to Congress next week on Iraq’s progress.

Iraqi PM freezes raids targeting militia
By Hamid Ahmed, AP, April 4, 2008
Iraq’s prime minister on Friday ordered a nationwide freeze on raids against suspected Shiite militants after the leader of the biggest militia complained that arrests were continuing even after he ordered fighters off the streets.

The announcement was a major shift from comments Prime Minister Nouri al-Maliki made a day earlier. It came after Shiite leader Muqtada al-Sadr, whose Mahdi Army militia fought government troops last week, hinted at retaliation if arrests of his followers did not stop.

Al Qaeda #2: We’ll attack Iran
By Noah Shacktman, Wired, April 3, 2008
Recently, Senator John McCain has repeatedly indicated that Iran and al-Qaeda are in cahoots. The terror group’s number two, Ayman al-Zawahiri, would beg to differ. In a long-promised online Q&A session, Zawahiri says it would be “in the interest” of Al-Qaeda to see Iran “sap[ped]” by a fight with the United States. Moreover, he seems to promise that the extremist collective will “battle” whoever wins that U.S.-Iran struggle.