Q: Let’s talk about the South, and about those regional, rural voters. You call yourself a rural advocate, albeit an avowed Democrat. In 2004, Senator John Kerry pretty much wrote off the South. As the electoral votes shift southward, with population growth, what are your recommendations for a Democratic candidate to woo Southern voters? Should a vice presidential choice come from the South. Will Nascar dads still be sought out in 2008? 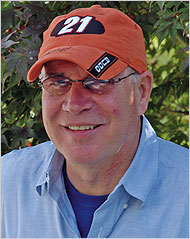 A: The Center for Rural Strategies, a non-partisan think tank in Whitesburg, Kentucky, did a poll on October 26, 2006. When asked what was the top issue going into the midterm elections, 38 percent of the respondents said “lack of economic fairness”. There’s the message.

Although everybody brings up Jim Webb when talk of military and foreign policy emerges, Obama needs to spend some quality time with Webb talking about economic fairness. Webb, who has evolved from a Scots-Irish Appalachian icon into rural America’s champion for economic fairness, knows more about the dire implications of lack of economic fairness for rural America and can put a face on it better than anyone alive. Jim has written tens of thousands of words on the subject, including his new book, “A Time To Fight.”

While I’m talking about Webb, he would be my first choice for vice president. Talk about a guy who could lead Obama through the culture. I sometimes wonder if Jim isn’t the father, son, and holy ghost of rural culture. And if the party really wants the “Reagan Democrats” back in the tent, I can’t think of anybody better to stand at the entrance than Jim. He’s the bell cow for those guys.

As far as the “Nascar Dad” is concerned, I still don’t understand what that was all about. I guess since “Soccer Moms” was such a popular catch phrase in 2000 that somebody thought it would be cute to use “Nascar Dads” as a catch phrase in 2004. Although I was heavily involved in the Nascar push, I never embarked on the project just to get males. Forty percent of the Nascar fans are women. I think a great new permutation for 2008 would be, “No More Lies.” [complete article]

In analyzing the returns from last week’s West Virginia Democratic primary, a phalanx of reporters and commentators have explained Hillary Clinton’s landslide victory by pointing out that West Virginians are a special set of Democrats, white, low income and undereducated. Some, like Josh Marshall of Talking Points Memo and Jonathan Tilove of the Newhouse papers, have linked the lackluster performance of Barack Obama in West Virginia to a larger Appalachian problem. These writers connect the presumptive nominee’s defeat in West Virginia, his previous losses in Ohio and Pennsylvania, and an anticipated poor outing in Tuesday’s Kentucky primary, to the historical, geographic and cultural imperatives shared by Appalachian mountain people.

The legions of pseudonym-laden online posters who follow in political punditry’s wake are less restrained in describing the shortcomings of Sen. Clinton’s Appalachian supporters. They suggest it has to do with her voters being racist, toothless, shoeless, and prone to marrying their cousins. In short, they characterize these “special” Democrats in much the same terms they used in quieter times to describe Republicans. [complete article]

Editor’s Comment — Whether the Obama campaign feels it does or doesn’t have a strategic need to embrace the rural voters, what seems more important is that rural America becomes an integral part of a campaign that in spirit focuses on inclusion. The bridge that crosses the urban-rural divide is respect.