John McCain on the psycho stuff
By Jeffrey Goldberg, The Atlantic, May 30, 2008

Jeffrey Goldberg: Do you think that Israel is better off today than it was eight years ago? 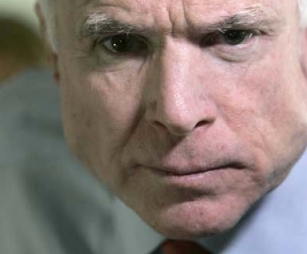 John McCain: I think Israel, in many respects, is stronger economically, their political process shows progress – when there is corruption, they punish people who are corrupt. The economy is booming, they have a robust democracy, to say the least. Bin Laden has not limited his hatred and desire to destroy the United States to the Israeli-Palestinian issue, though Israel is one of the objects of his jihadist attitude. What you’re trying to do is get me to criticize the Bush Administration.

JM: Yeah, you are, but I’ll try to answer your question. Because of the rise of Islamic extremism, because of the failure of human rights and democracy in the Middle East, or whether there are a myriad of challenges we face in the Middle East, all of them severe, all of them pose a threat to the existence to the state of Israel, including and especially the Iranians, who have as a national policy the destruction of the state of Israel, something they’ve been dedicated to since before President Bush came to office.

JG: What do you think motivates Iran?

JM: Hatred. I don’t try to divine people’s motives. I look at their actions and what they say. I don’t pretend to be an expert on the state of their emotions. I do know what their nation’s stated purpose is, I do know they continue in the development of nuclear weapons, and I know that they continue to support terrorists who are bent on the destruction of the state of Israel. You’ll have to ask someone who engages in this psycho stuff to talk about their emotions.

Editor’s Comment — If there was a poll asking political stand-up comics who they want to become the next president – want, that is, in terms of who would be good for the trade – John McCain would surely be the favorite. This is a guy who’s out there every day crafting new parodies of himself. The man who disclaims any knowledge of “the psycho stuff” flashes back his instant response: it’s hatred that motivates the Iranians, and then goes on to say how he’s in no position to know what their emotions are – barring of course that they’re filled with hatred. And this coming from a man who in the same interview claims that he’d want to be “chief negotiator” for resolving the Israeli-Palestinian conflict. Level-headed, thoughtful, even-minded, well-informed, broad-minded – yep, John McCain would make a great chief negotiator!

McCain, the Surge, and ‘verb tenses’
Fact Checker, Washington Post, May 30, 2008
John McCain got ahead of events this week in claiming that the United States military has gone down to “pre-surge levels” in Iraq. That will not happen until later this year, even by the most optimistic scenario. He is also wrong about the city of Mosul being “quiet”, unless you exclude car bombs and other mayhem. His advisers attempted to spin his remarks as a simple matter of “verb tense.” But there is a big difference between “Mission Accomplished” and “We expect the mission to be accomplished soon.”

Memo to Scott McClellan: Here’s what happened
By Warren P. Strobel and Jonathan S. Landay, McClatchy, May 29, 2008
Until now, we’ve resisted the temptation to post on former White House press secretary Scott McClellan’s new book, which accuses the Bush White House of launching a propaganda campaign to sell the war in Iraq.

Why? It’s not news. At least not to some of us who’ve covered the story from the start.

(Click here, here and here to get just a taste of what we mean).

Second, we find it a wee bit preposterous — and we are being diplomatic here — that a man who slavishly – no, robotically! — defended President Bush’s policies in Iraq and elsewhere is trying to “set the record straight” (and sell a few books) five years and more after the invasion, with U.S. troops still bravely fighting and dying to stabilize that country.

But the responses to McClellan from the Bush administration and media bigwigs, history-bending as they are, compel us to jump in. As we like to say around here, it’s truth to power time, not just for the politicians but also for some folks in our own business.

Former Bush donors now giving to Obama
By Greg Gordon, McClatchy, May 30, 2008
Beverly Fanning is among the campaign donors who’ll be joining President Bush at a gala at Washington’s Ford’s Theater Sunday night, but she says that won’t dissuade her from her current passion: volunteering for Barack Obama’s presidential campaign.

She isn’t the only convert. A McClatchy computer analysis, incomplete due to the difficulty matching data from various campaign finance reports, found that hundreds of people who gave at least $200 to Bush’s 2004 campaign have donated to Obama.

The new Middle East
By Paul Woodward, The National, May 29, 2008
“Iran, Turkey, all the Arabs, Hizbollah, Hamas, and Israel all share one and only one common trait: They routinely ignore the advice, and the occasional threats, they get from Washington,” the Daily Star columnist Rami G Khouri wrote this week.

“[Condoleezza] Rice was correct in summer 2006 when she said we are witnessing the birth pangs of a new Middle East. But the emerging new regional configuration is very different from the one she fantasised about and tried to bring into being with multiple wars in Iraq, Afghanistan, Palestine, Somalia and Lebanon, and threats against Iran and Syria.”

In McClatchy Newspapers, Warren Strobel and Hannah Allam wrote: “In a week of dramatic developments in the Middle East, the most dramatic development of all may have been the fact that the United States, long considered the region’s indispensable player, was missing in action.

Iraqi officials worry about security deal with U.S.
By Leila Fadel, McClatchy, May 30, 2008
Thousands of followers of militant Muqtada al Sadr peacefully took to the streets Friday following his call to protest a bilateral pact that would govern the economic, security and political relationship between Iraq and the United States.

The Status of Forces Agreement and an economic and political accord are expected to be completed by July and must pass the parliament before being finalized. Already voices of dissent are in the air.

The United Nation’s mandate that allows foreign forces to occupy Iraq will not be renewed at the end of the year. So any future U.S. military involvement in the war-torn nation can only continue with such an agreement.

Cowardice of silence
By John Pilger, The Guardian, May 31, 2008
When I phoned Aung San Suu Kyi’s home in Rangoon yesterday, I imagined the path to her door that looks down on Inya Lake. Through ragged palms, a trip-wire is visible, a reminder that this is the prison of a woman whose party was elected by a landslide in 1990, a democratic act extinguished by men in ludicrous uniforms. Her phone rang and rang; I doubt if it is connected now. Once, in response to my “How are you?” she laughed about her piano’s need of tuning. She also spoke about lying awake, breathless, listening to the thumping of her heart.

Now her silence is complete. This week, the Burmese junta renewed her house arrest, beginning the 13th year. As far as I know, a doctor has not been allowed to visit her since January, and her house was badly damaged in the cyclone. And yet the secretary-general of the United Nations, Ban Ki-moon, could not bring himself to utter her name on his recent, grovelling tour of Burma. It is as if her fate and that of her courageous supporters, who on Tuesday beckoned torture and worse merely by unfurling the banners of her National League for Democracy, have become an embarrassment for those who claim to represent the “international community”. Why?

Hizbullah is less credible. So now what?
By Rami G. Khouri, Daily Star, May 31, 2008
The Doha agreement that ended the latest round of political tension and armed clashes in Lebanon has, at best, bought 18-24 months of calm for the country, and an opportunity for the largely discredited political elite to start acting responsibly. Hizbullah remains the focus of discussion about the challenges ahead, given its military strength relative to the other Lebanese factions, including the central government and its armed forces.

The dilemma for Hizbullah is that its strength since its inception a quarter of a century ago in the early 1980s is now its weakness when it comes to its political engagement inside Lebanon. Its combination of military prowess, links with Syria and Iran, and domestic strategic political ambiguity about its ultimate aims for Lebanon are all issues that have rallied significant opposition to it among a growing circle of Lebanese.

This is not purely a question of “What does Hizbullah want?” or “Will Hizbullah give up its arms?” Hizbullah’s power and aims cannot be analyzed in a vacuum, because the party did not emerge as the most powerful military force in the country in isolation of the behavior of other national actors. Two issues are at play here: Hizbullah’s status, and the quality of Lebanese statehood. The strength and status of Hizbullah and the weakness of the Lebanese state are symbiotic developments that feed off each other, and can only be resolved together. The coming era of calm political adjustment in Lebanon, including the national unity government and the summer 2009 parliamentary elections, must address very difficult core disputed issues. The central one is the Hizbullah-state relationship, which is directly or indirectly linked to other tough issues such as Syrian-Lebanese ties, and the role of external powers such as Iran, Saudi Arabia and the United States.