Entitled to their opinions, yes. But their facts?
By Clark Hoyt, New York Times, June 1, 2008

On May 12, The Times published an Op-Ed article by Edward N. Luttwak, a military historian, who argued that any hopes that a President Barack Obama might improve relations with the Muslim world were unrealistic because Muslims would be “horrified” once they learned that Obama had abandoned the Islam of his father and embraced Christianity as a young adult… 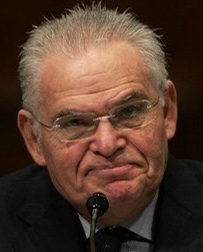 I interviewed five Islamic scholars, at five American universities, recommended by a variety of sources as experts in the field. All of them said that Luttwak’s interpretation of Islamic law was wrong.

David Shipley, the editor of the Op-Ed page, said Luttwak’s article was vetted by editors who consulted the Koran, associated text, newspaper articles and authoritative histories of Islam. No scholars of Islam were consulted because “we do not customarily call experts to invite them to weigh in on the work of our contributors,” he said.

That’s a pity in this case, because it might have sparked a discussion about whether Luttwak’s categorical language was misleading, at best.

Editor’s Comment — The New York Times’ “public editor” (appointed by the public was he?) Clark Hoyt, describes Edward Luttwak as a military historian. Luttwak could also — and I would say with greater precision — be described as a shit stirrer. His column “President apostate?” was nothing more than a disingenuous argument with the apparent purpose of poisoning the presidential campaign.

…most citizens of the Islamic world would be horrified by the fact of Senator Obama’s conversion to Christianity once it became widely known — as it would, no doubt, should he win the White House. This would compromise the ability of governments in Muslim nations to cooperate with the United States in the fight against terrorism, as well as American efforts to export democracy and human rights abroad.

That an Obama presidency would cause such complications in our dealings with the Islamic world is not likely to be a major factor with American voters, and the implication is not that it should be. But of all the well-meaning desires projected on Senator Obama, the hope that he would decisively improve relations with the world’s Muslims is the least realistic.

By chance, in today’s Washington Post, Azadeh Moaveni provides some contradicting evidence right from the axis of evil:

Most Iranians belong to generations with compelling reasons to admire the United States. Those old enough to remember the shah’s era are nostalgic for the prosperity and international standing Iran once enjoyed; those born after the revolution see no future for themselves in today’s Iran and adopt their parents’ gilded memories as their own. These longings have young and old Iranians alike following the U.S. election. Most seem to favor Sen. Barack Obama, who they believe will patch up relations with Iran.

Until that is — Luttwak would have us believe — they discover Obama is an apostate.

The fact is, those who are pushing the Obama-is-or-was-a-Muslim line, have only one purpose in mind: to tap into a rich vein of Islamophobia that they hope will be able to propel John McCain into the White House.

The New York Times turned over a portion of its op-ed page to serve that purpose and now the op-ed page editor David Shipley has received a rebuke from the public editor. I imagine Shipley feels — in the immortal words of Denis Healey — like he just got savaged by a dead sheep.

4 thoughts on “CAMPAIGN 08 & EDITOR’S COMMENT: How much does it hurt to be scolded by the NYT’s public editor?”