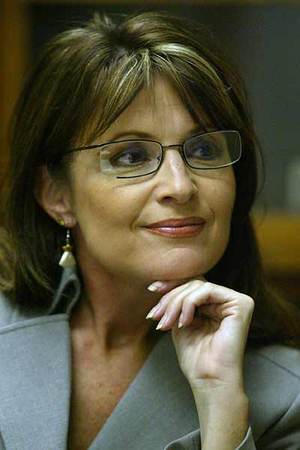 aybe John McCain should fire the advisers who won’t let Sarah Palin do more interviews. The Alaska Governor has faced two major campaign challenges — her acceptance speech and last night’s debate — and each time she’s shown herself worthy of the national stage. Let Mrs. Palin be herself, and then when she makes a mistake, as every candidate does, it won’t be treated like some epic judgment on her fitness to be Vice President. [complete article]

Editor’s Comment — Sarah Palin’s performance against Joe Biden was everything the McCain campaign could have hoped for — but therein lies the campaign’s problem. Her success has nulified the argument for keeping her under wraps.

A last-minute effort by Palin supporters to paint debate-moderator Gwen Ifill as being in the tank with Obama may well have had its desired effect by making Ifill pull a few punches. Why, for instance, did Ifill not ask Palin a question that so many observers would like answered:

Since Ifill didn’t ask it, the question’s still out there.

OK. Since energy policy is Palin’s silver bullet on foreign policy, national security, the economy — and who knows, maybe she can even work in an angle on health care — it’s time she gave an in-depth interview on the issue where Sarah Palin is supposedly a national expert. How about she does a segment on 60 Minutes or Face the Nation or Charlie Rose, and let’s see how she does in clearly articulating the nature of the problem and her vision of a solution when it comes to crafting an energy policy for the US.

At the end of the debate, Palin put in a request for unmediated contact with the American people:

I like being able to answer these tough questions without the filter, even, of the mainstream media kind of telling viewers what they’ve just heard. I’d rather be able to just speak to the American people like we just did.

Sorry, but that was the one and only vice-presidential debate. So, she’ll either have to rely on stump speeches, handshakes, and John McCain’s bald-faced lies about how he relies on her advice, or, she’ll need to find the courage to face the media.

Krauthammer’s Hail Mary Rule: You get only two per game. John McCain, unfortunately, has already thrown three. The first was his bet on the surge, a deep pass to David Petraeus who miraculously ran it all the way into the end zone.

Then, seeking a game-changer after the Democratic convention, McCain threw blind into the end zone to a waiting Sarah Palin. She caught the ball. Her subsequent fumbles have taken the sheen off of that play, but she nonetheless invaluably solidifies his Republican base.

He tempted fate one time too many. After climbing up on his high horse, McCain had to climb down. The crisis unresolved, he showed up at the debate regardless, rather abjectly conceding Obama’s mocking retort that presidential candidates should be able to do “more than one thing at once.” (Although McCain might have pointed out that while he was trying to do two things, Obama was sitting on the sidelines doing one thing only: campaigning.)

You can’t blame McCain. In an election in which all the fundamentals are working for the opposition, he feels he has to keep throwing long in order to keep hope alive. Nonetheless, his frenetic improvisation has perversely (for him) framed the rookie challenger favorably as calm, steady and cool.

In the primary campaign, Obama was cool as in hip. Now Obama is cool as in collected. He has the discipline to let slow and steady carry him to victory. He has not at all distinguished himself in this economic crisis — nor, one might add, in any other during his national career — but detachment has served him well. He understands that this election, like the election of 1980, demands only one thing of the challenger: Make yourself acceptable. Once Ronald Reagan convinced America that he was not menacing, he won in a landslide. If Obama convinces the electorate that he is not too exotic or green or unprepared, he wins as well. [complete article]

Editor’s Comment — Charles Krauthammer can be credited as a neocon who isn’t willing to even pretend he’s started drinking the Kool-Aid. And the McCain campaign’s belief that hitching their candidates to the slogan “Maverick” is a pathway to victory, merely underlines the degree to which the word “Republican” has become toxic.

In a time of crisis, will most Americans decide they want to place a bet on Mr Unpredictable? I don’t think so. Indeed, the more McCain slides in the polls, the more unpredictable he’s likely to become. He won’t be able to persuade others to see him differently than the way he sees himself.

The voters are looking for a leader, not a loner.