The prospect of an odd couple
By Kevin Peraino, Newsweek, November 1, 2008 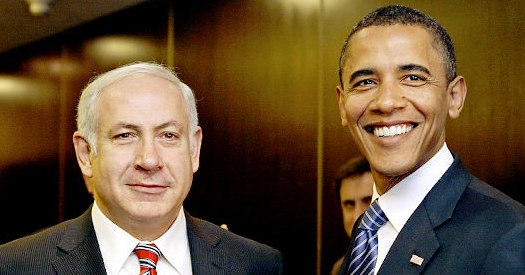 One morning this past summer, Barack Obama sat down around a conference table in Jerusalem’s King David Hotel with Benjamin Netanyahu, the leader of Israel’s Likud Party. Neither man ran a country but both had high hopes. The talk was “like a hypothetical business discussion” among “two people who knew they might be working together,” says a Netanyahu associate who was present but requested anonymity to speak freely. But that’s where the similarities stop. Netanyahu, 59, is an unreconstructed hawk, raised in the cold war’s shadow. Obama listened politely, but the gap was obvious. “Obama, clearly, is a product of a new age,” says the Israeli.

The Jewish state, on the other hand, may be on the verge of slipping into an older one. Israel’s doves are struggling. Foreign Minister Tzipi Livni announced last week that she had failed to form a government; lawmakers set elections for February. The biggest benefactor is likely to be Netanyahu, who’s now even with Livni in polls. The Likud leader seems the most American of Israeli politicians. His uncompromising rhetoric would probably mesh well with a McCain administration. Yet at a moment when both Israeli hawks and American neoconservatives have been chastened, Netanyahu’s rebirth appears slightly incongruous, even atavistic. [continued…]

Editor’s Comment — If Benjamin Netanyahu becomes Israel’s next prime minister, are the prospects for the rehabilitation of the Middle East peace process as dim as they have been for as long as George Bush has been president? I suspect not.

Netanyahu might delight in preening his feathers as Israel’s uber-hawk as he issues dire warnings that it’s 1938 — a rerun that’s already lasted two years — but he’s also a political opportunist par excellence. He’s an operator dressed in ideologue’s clothing.

Come February, if he ends up being elected, a trip to the White House will no doubt come close to the top of his agenda. But if the Hamas ceasefire is still holding in Gaza (as it promises to do), rather than the hawkish Prime Minister Netanyahu trying to cajole the dovish President Obama into a strike on Iran, Obama will be the one with more political leverage.

For a new American president to invest political capital in trying to resolve the Middle East conflict while two wars and a financial crisis clamor for his attention, he’ll need persuading that his efforts will not be wasted by an Israeli government that persists in business as usual. For Netanyahu, calm in Sderot is not something he casually toss out just for the sake of looking tough. If he sees that it serves his interests the hawk will pivot into a pragmatist. If Obama presses Netanyahu to start treating the 2002 Saudi initiative seriously (a move that Olmert, Livni and others have already suggested), the Israeli prime minister may grudgingly conclude he has no credible alternative.

… should Obama be elected, America will not be cleansed of its racial history or conflicts. It will still have a virtually all-white party as one of its two most powerful political organizations. There will still be white liberals who look at Obama and can’t quite figure out what to make of his complex mixture of idealism and hard-knuckled political cunning, of his twin identities of international sojourner and conventional middle-class overachiever.

After some 20 months, we’re all still getting used to Obama and still, for that matter, trying to read his sometimes ambiguous takes on both economic and foreign affairs. What we have learned definitively about him so far — and what may most account for his victory, should he achieve it — is that he had both the brains and the muscle to outsmart, outmaneuver and outlast some of the smartest people in the country, starting with the Clintons. We know that he ran a brilliant campaign that remained sane and kept to its initial plan even when his Republican opponent and his own allies were panicking all around him. We know that that plan was based on the premise that Americans actually are sick of the divisive wedge issues that have defined the past couple of decades, of which race is the most divisive of all. [continued…]

An unscientific poll of 109 professional historians this year found that 61 percent rated President Bush as the worst president in American history.

A couple of others judged him second-worst, after James Buchanan, whose incompetence set the stage for the Civil War. More than 98 percent of the historians in the poll, conducted through the History News Network, viewed Mr. Bush’s presidency as a failure.

Mr. Bush’s presidency imploded not because of any personal corruption or venality, but largely because he wrenched the United States out of the international community. His cowboy diplomacy “defriended” the United States. He turned a superpower into a rogue country. Instead of isolating North Korea and Iran, he isolated us — and undermined his own ability to achieve his aims.

So here’s the top priority for President Barack Obama or President John McCain: We must rejoin the world. [continued…]

While Barack Obama enters the final days of the presidential campaign with a clear lead in the polls – but not so big as to rule out a surprise victory for John McCain – the impact of the 2008 presidential campaign will depend not only on who wins but also on whether the results signify a deeper realignment in American politics.

“We like to tell the election story through the candidates,” said Thomas Patterson, a professor at Harvard’s John F. Kennedy School of Government. “But this time there are larger forces in play.”

And while Obama’s lead, between three and seven percentage points in most national polls, is big enough to make him the favorite going into Tuesday, the other big questions of the election are all too close to call.

Is the “Reagan Revolution” over? Going down the stretch, McCain is campaigning heavily on Obama’s comment that he wants to “spread the wealth.” And McCain has even discovered a seven-year-old radio interview suggesting that Obama may believe in “redistributive” economics.

During the heyday of the Democrats’ New Deal coalition, which dominated politics from 1932 until 1980, the idea of spreading the wealth around was hardly political poison – it was the backbone of the party’s economic philosophy. Since 1980 and the “Reagan Revolution,” however, using tax policies to redistribute income has been widely viewed as an outmoded approach that chokes off economic growth.

Obama hasn’t fully embraced ’60s-style tax-and-spend liberalism, but he hasn’t run away from it as much as other Democratic presidential nominees since 1984 have done. [continued…]

They are some of the more memorable slip-ups or slights within the news media’s coverage of the 2008 presidential campaign.

A Fox News anchor asks whether Senator Barack Obama and his wife had greeted each other with a “terrorist fist jab.” Rush Limbaugh calls military personnel critical of the war in Iraq “phony soldiers.” Mr. Limbaugh and another Fox host repeat an accusation that Mr. Obama attended a madrassa, or Islamic school, in Indonesia.

Each of these moments might have slipped into the broadcast ether but for the efforts of Media Matters for America, the nonprofit, highly partisan research organization that was founded four years ago by David Brock, a formerly conservative author who has since gone liberal.

Ripping a page from an old Republican Party playbook, Media Matters has given the Democrats a weapon they have not had in previous campaigns: a rapid-fire, technologically sophisticated means to call out what it considers “conservative misinformation” on air or in print, then feed it to a Rolodex of reporters, cable channels and bloggers hungry for grist. [continued…]

How we fuel Africa’s bloodiest war
By Johann Hari, The Independent, October 30, 2008

The deadliest war since Adolf Hitler marched across Europe is starting again – and you are almost certainly carrying a blood-soaked chunk of the slaughter in your pocket. When we glance at the holocaust in Congo, with 5.4 million dead, the clichés of Africa reporting tumble out: this is a “tribal conflict” in “the Heart of Darkness”. It isn’t. The United Nations investigation found it was a war led by “armies of business” to seize the metals that make our 21st-century society zing and bling. The war in Congo is a war about you.

Every day I think about the people I met in the war zones of eastern Congo when I reported from there. The wards were filled with women who had been gang-raped by the militias and shot in the vagina. The battalions of child soldiers – drugged, dazed 13-year-olds who had been made to kill members of their own families so they couldn’t try to escape and go home. But oddly, as I watch the war starting again on CNN, I find myself thinking about a woman I met who had, by Congolese standards, not suffered in extremis.

I was driving back to Goma from a diamond mine one day when my car got a puncture. As I waited for it to be fixed, I stood by the roadside and watched the great trails of women who stagger along every road in eastern Congo, carrying all their belongings on their backs in mighty crippling heaps. I stopped a 27 -year-old woman called Marie-Jean Bisimwa, who had four little children toddling along beside her. She told me she was lucky. Yes, her village had been burned out. Yes, she had lost her husband somewhere in the chaos. Yes, her sister had been raped and gone insane. But she and her kids were alive. [continued…]

On a rainy Friday evening in early August, six Taliban fighters attacked a police post in a village in Buner, a quiet farming valley just outside Pakistan’s lawless tribal region.

The militants tied up eight policemen and lay them on the floor, and according to local accounts, the youngest member of the gang, a 14-year-old, shot the captives on orders from his boss. The fighters stole uniforms and weapons and fled into the mountains.

Almost instantly, the people of Buner, armed with rifles, daggers and pistols, formed a posse, and after five days they cornered and killed their quarry. A video made on a cellphone showed the six militants lying in the dirt, blood oozing from their wounds.

But it says as much about the shortcomings of Pakistan’s increasingly overwhelmed police forces and the pell-mell nature of the efforts to stop the militants, who week by week seem to seep deeper into Pakistan from their tribal strongholds. [continued…]

Iaq’s prime minister is pushing the idea that the U.S. departure is in sight in a bid to sell the security deal with Washington to Iran.

To reinforce the message, the Iraqis are asking for changes to the deal that would effectively rule out extending the U.S. military presence beyond 2011.

Prime Minister Nouri al-Maliki and his allies are also describing the agreement not as a formula for long-term U.S.-Iraqi security cooperation — the original goal when the talks began earlier this year — but as a way to manage the U.S. withdrawal.

It’s unclear whether this will be enough to win over the Iranians and Iraqi critics — or whether the U.S. will go along with the demands submitted by the Iraqi Cabinet this week. [continued…]